6 Android Collaboration Apps for Small Teams on a Budget

Following in line with my last post on the best collaboration apps for iOS, I decided that I couldn’t leave our Android readers hanging! After all, there are over a billion Android users worldwide.

So we’ve put together a list of the best collaboration apps for small teams. Obviously someone’s opinion of what constitutes a “small team” is subjective, so we’ll be sticking to the same rules that we laid out for the iOS article. For those who don’t remember, here’s how we define a small team or company for the purposes of this article:

We’ve also divided up the list into two different sections: apps that focus more on communication (e.g., instant messengers), and those that focus mostly on collaboration (e.g., task and project management). We could split hairs over the differences between the definition of a collaboration app and a communication app, but that’s an exciting and existential discussion for a different article.

And speaking of different articles, it will quickly become clear that you’ll see some of the same apps as you saw in the iOS article; it’s simply because many of the most popular and successful apps out there develop for both platforms. So with all of that in mind, let’s move forward and take a look at the best Android collaboration apps for small teams.

Android collaboration apps with a focus on chatting 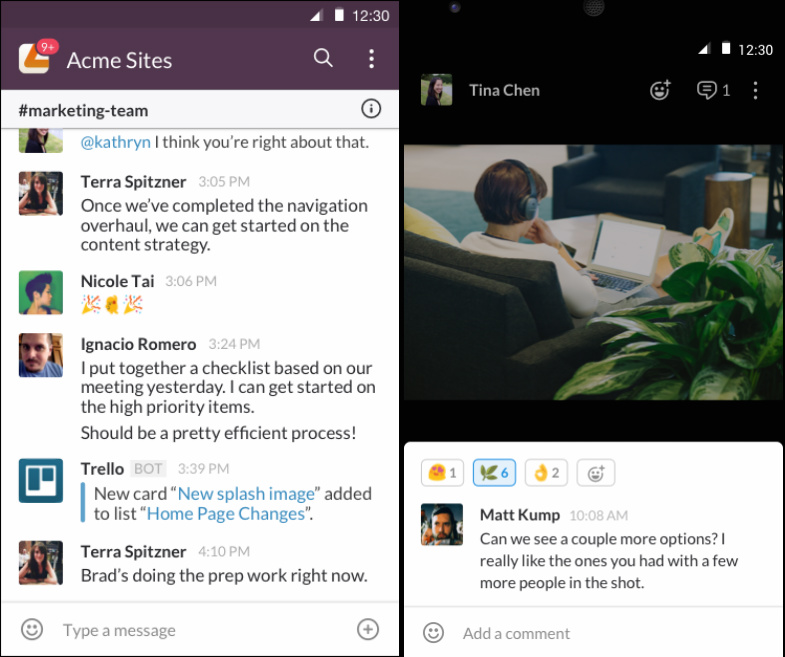 Slack: Slack is the darling of the Software-as-a-Service (SaaS) world and is one of the few apps that employees don’t seem to mind their company adopting. A big part of that has to do with the simplicity of the app: its simple design is easy enough to use that a tech-novice should have no problem using it right off the bat.

The Android version of Slack has been well-received on the Google Play Store with one user writing, “Clutter free app! Great fit for groups to send files, pictures, or links in an open forum or a private one. Keeps all your info in place without filling [up] your email or long strands of replay all.” Slack also replies to users having problems with the app and asks them to get in touch.

Price: Slack is free to sign up for and and you’ll get features such as 5GB of storage, access to the Android app and other platforms, searchable message archives (up to 10k), and two-person calling. If are interested in getting more features, there are tiered plans (Standard, Plus, Enterprise) that charge per user. 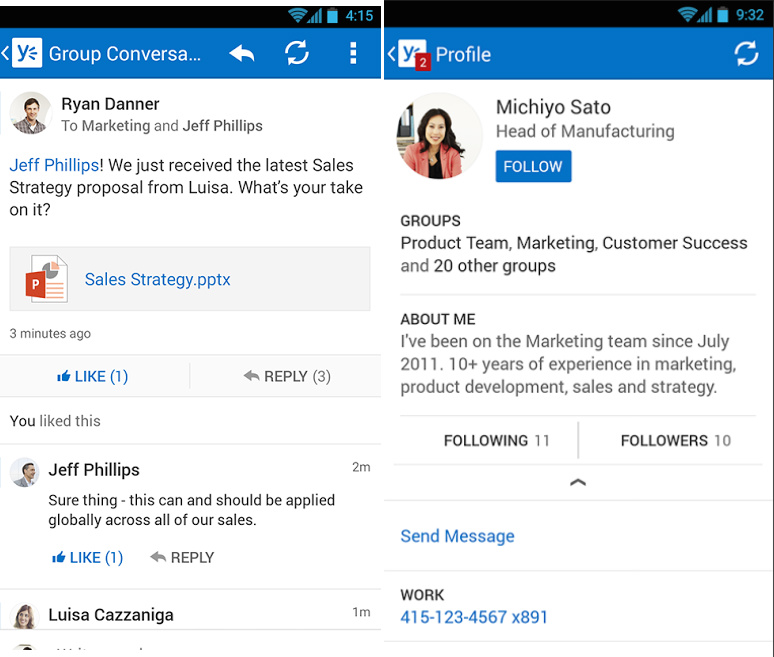 Yammer: Despite its laid-back sounding name, Yammer hails from the Microsoft Office 365 family of products.

Yammer’s design seems Facebook-inspired: the bottom of the screen features links to a news feed, inbox, groups, notifications, and the app is wrapped in obviously familiar blue-and-white color scheme. The Android version sticks to this design and includes cool features, such as support for up to 25 languages and integrated “on-the-fly message translation.” Translation may seem unnecessary to a small team Android, and Yammer user Paul T writes on Google Play, “Started a week or so ago trying this out and now using it more and more. Great for structuring exchanges and sharing “on the hoof”. Can also easily share “scrapbook” items from various sources.”

Price: A limited version of Yammer is available for free, but to harness the true power of it you’ll need to go for an upgrade. If you’ve already got an Office 365 account, it’s likely you’ve already got access. Instead of explaining the details of each slightly different pricing plan, check out Yammer’s page for more info. 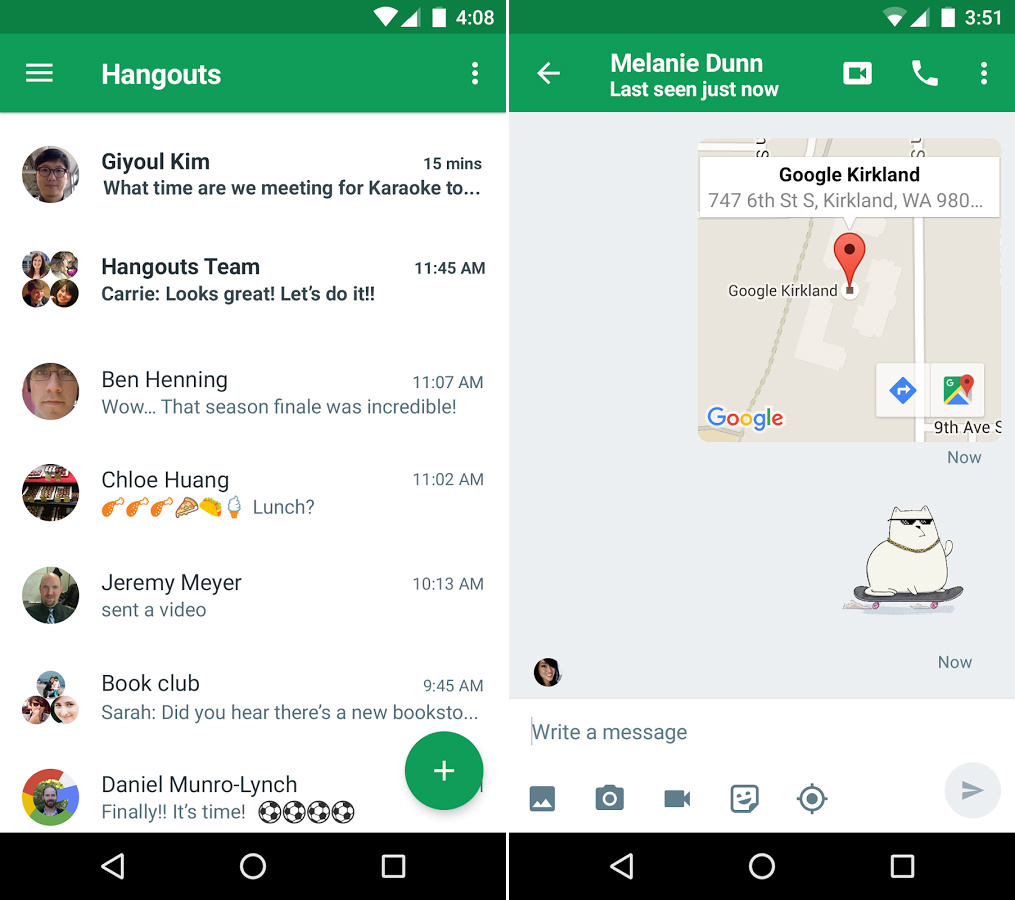 Google Hangouts: This addition is both odd and obvious—if you’ve got an Android phone, you’ve probably already got Hangouts. That ubiquity is the reason it’s worth giving hangouts a try: it’s free and people on your team are already familiar with using it.

Hangouts has received some criticism lately because it’s removed a feature that merged a phone’s SMS messaging system with Hangouts. Despite that, it’s still worth trying it on a small team, if only because it’s free and you’re probably using some of the other Google apps.

Price: It’s entirely possible for your team to use the app for free. Google also offers Apps for Work, which are modified versions of their app suite (think Docs, Sheets, and Slides). Plans usually cost around $4 a month per member, but it’s worth checking out the pricing chart if you want a subscription. Remember though: you can still give it a try without paying for anything.

Android collaboration apps with a focus on project management 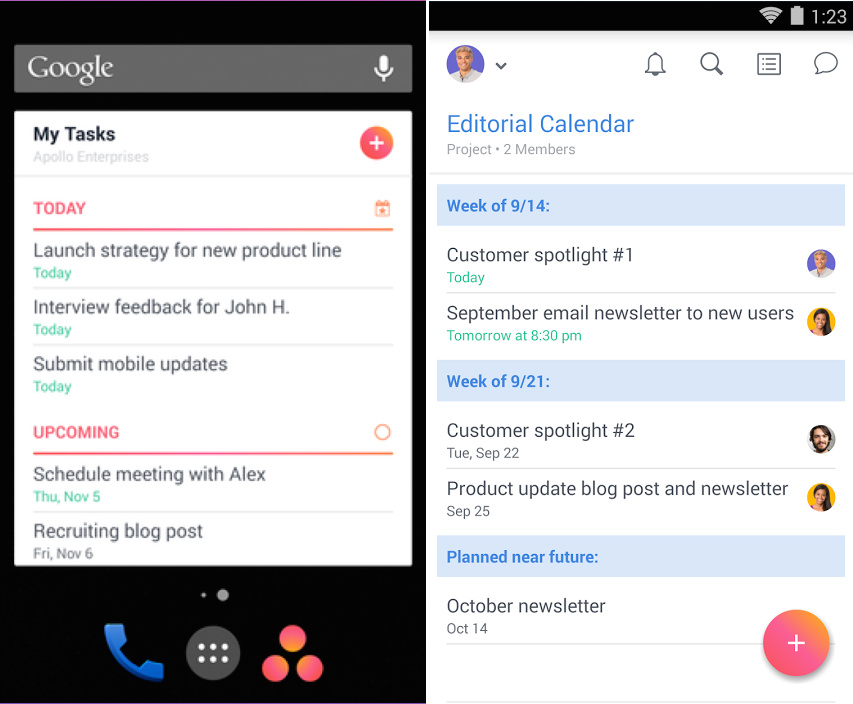 Asana: Asana is great for small teams that have to stay on top of a project’s progress. Asana for Android follows an even more minimalist design (to its advantage) when compared to its desktop parent. For example, there are very few icons in the app, leaving more room for text on the screen.

Gregory Wilnau on Google Play writes, “I used Asana a few years ago, stopped, and recently rediscovered it! Love the new design; it’s so easy to navigate and communicate with others. Keep up the great work, you guys are doing an awesome job!”

Price: Asana is free for up to 15 members, which makes it a great fit for this article (small teams 10 and under), although you won’t get access to all its features for free. Instead, you’ll get access to unlimited tasks, projects, and conversations, as well as basic dashboards. The Premium plan runs at $8.33 per month, but Asana says that the price per member is automatically reduced for small teams. The premium version includes features such as priority support, private projects, no team member limit, unlimited guests, and some more customization options regarding security and data exporting. 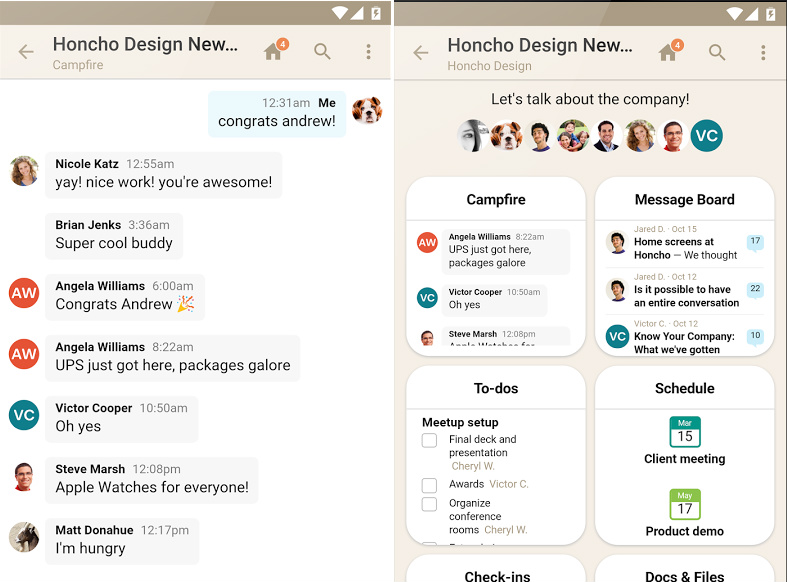 At the moment Basecamp is in its third iteration (Basecamp 3), and the company has made the unusual move of supporting legacy software and not forcing customers to upgrade or update. Basecamp also appears to have excellent customer support for its Android product as Basecamp reps respond to both negative and positive comments.

It’s important to note that there are two Basecamp apps on Google Play: The legacy Basecamp 2, and the newer Basecamp 3. David Younts writes on Google Play about Basecamp 3, “This is what email should be. It’s Facebook for the workplace. Indispensable for keeping groups of people on the same page and individuals organized. It relieves a lot of stress to know you’re not letting anything slip through the cracks!” 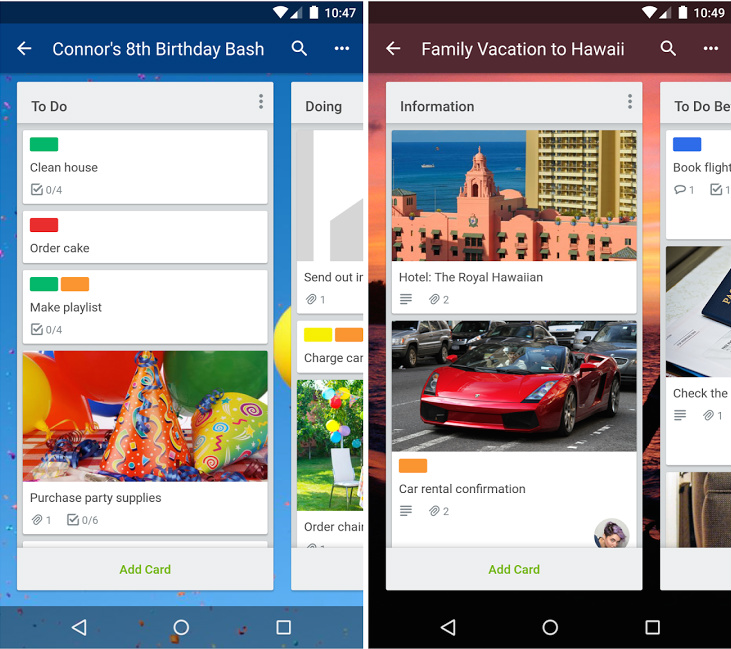 Trello: Trello is a simple task management app that often works as either a personal task list or a professional one. The app separates tasks into different boards and uses a simple drag-and-drop interface to navigate. The Android version of the app emulates that simple design and currently has a 4.5 rating based on approximately 55,000 votes.

Price: Trello comes in three flavors: Free, Business Class, and the ignored-in-this-article Enterprise. The free version gets you file attachments up to 10MB, integrations with Box, Drive, and Dropbox, and unlimited boards, lists, members, checklists, cards, and attachments. After that, it gets a bit more expensive, starting with the business class plan that’s priced at $9.99 per member per month, billed annually. The Business Class option includes everything in the free tier plus more integrations (Hangouts, Evernote, Mailchimp), file attachments up to 250MB, priority email support, and more control security.

Did we miss an app? Let us know!

Is there a slammin’ communication app that your company is using that we left off the list? Let us know in the comments below and make sure to take a look at our communication and collaboration software categories to find even more apps.