User research trends: Which accounting software for small business is most popular?

The black hole of buying accounting software for small business is big enough to scare even the biggest math wonk. With so many products on the market, it can seem like there’s no simple starting point.

And accounting itself is anything but simple - it’s a precise task that must get done correctly. This means that choosing the right accounting software to guide you through your country’s unique tax forms and filing deadlines is essential.

Each app’s score is calculated using five unique data points, including user reviews. So, these rankings give us a strong sense of which accounting software for small business is most popular.

But geography isn’t one of the five data points. That made us question if some accounting software for small business is more popular in certain countries than others.

To answer this question, GetApp went straight to the source: our own users. We analyzed data from GetApp users with LinkedIn-verified accounts on GetApp.com who tell us that they use specific accounting apps by switching the “I use this” tab to green.

Company size varied from solopreneurs to 999 employees. This means that all companies fit within Gartner’s size classification of a small and midsize business (SMB).

We wanted to compare software buyers who denoted that they live in the U.S., Australia, Canada, or Great Britain. So, we segmented users into four categories based on geography. Then, we counted the number of times an accounting software app appeared and tallied the top five results per category. The accounting apps with the most votes won each respective category. 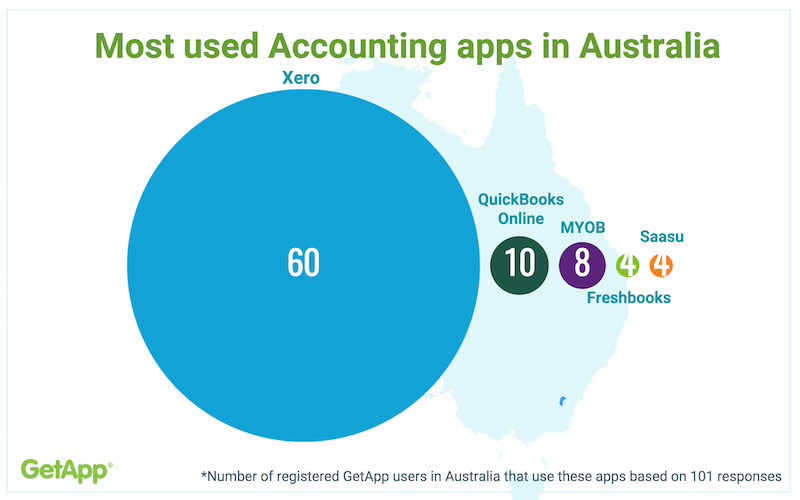 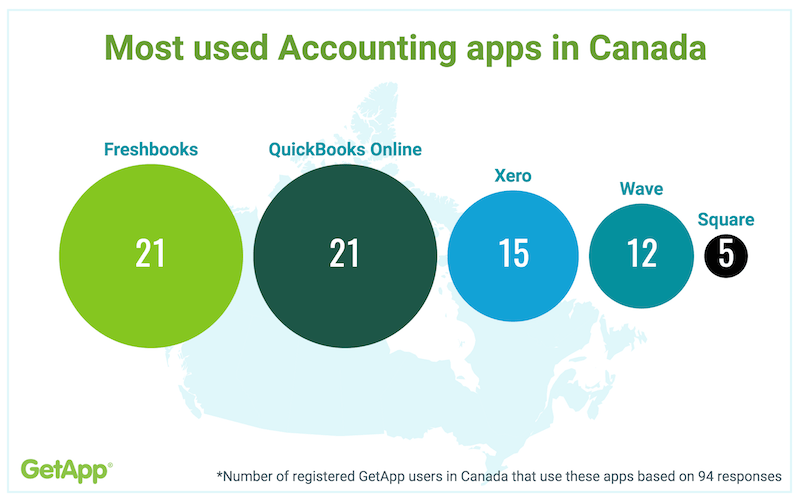 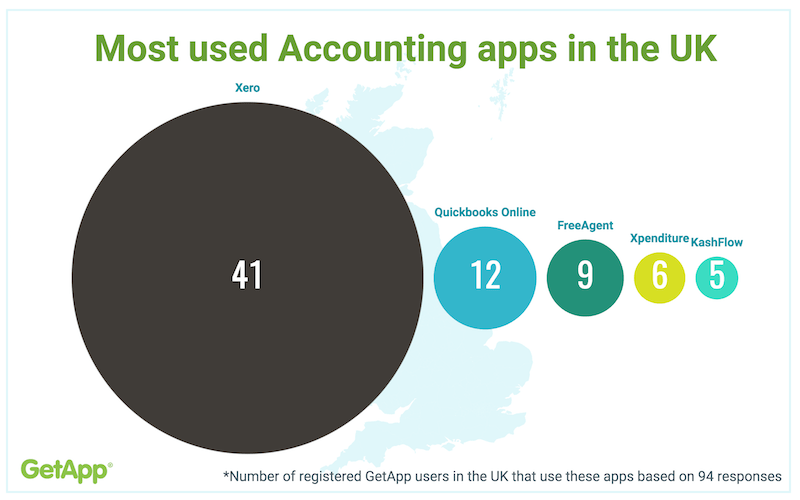 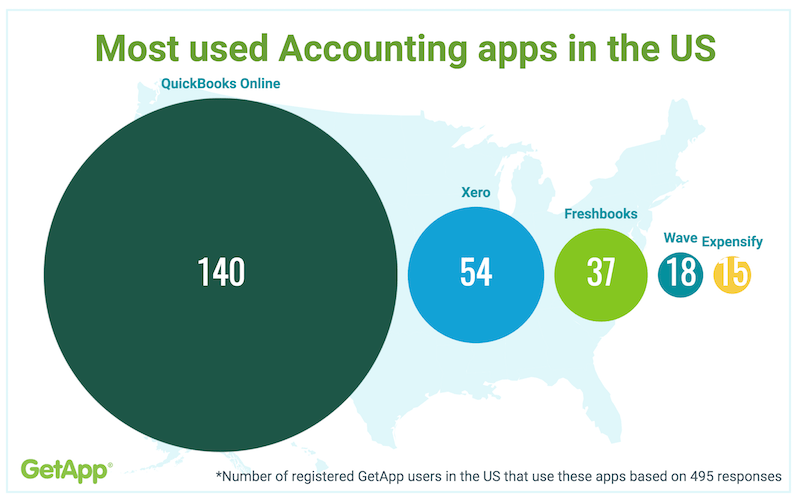 QuickBooks Online is the accounting software of choice for U.S.-based SMB owners; more than one in four uses it to balance the books. But this software is substantially less popular among SMB owners in Australia, Canada, and Great Britain. Xero has a stronger share in these respective markets.

Trained accountants were not their target user. Instead, Cook and Proulx marketed QuickBooks at small business owners with no accounting background. Their pitch worked - an Intuit press release from 2008 shared that QuickBooks accounted for 94.2 percent of retail units in the business accounting category.

However, it’s worth noting that this press release didn’t clarify whether it was discussing global market share or solely the U.S. Intuit didn’t release a UK-specific version of QuickBooks Online until 2011. Today, it offers country-specific products for SMB owners in Australia, Canada, and India. QuickBooks Online’s global version can also be customized by the user.

A 2014 buyer report from Software Advice found that QuickBooks maintained strong market share. Their analysis revealed that 25 percent of small business accounting software users named QuickBooks as their tool of choice. But the same report found that accounting software buyers preferred cloud-based deployment models at a rate that was 32 percent lower than the average across other industries that Software Advice analyzed in 2014.

At the time, Columnist and Consultant Gene Marks hypothesized that QuickBooks owed its dominance to customer frustration with on-premise software. He also predicted that accounting software buyers would move away from the old QuickBooks towards newer, web-based products - like QuickBooks Online.

That’s certainly true within the U.S. SMB market - more than one in four (28 percent of) small business owners prefer QuickBooks Online. The runner-up - Xero - comes in a distant second with 11 percent. But things look quite different in the other three markets.

In Australia and Great Britain, QuickBooks Online came in a distant second. Xero dominated both of these markets - 59 percent of Australian and 44 percent of British SMB owners prefer it, respectively.

Even in Canada - where Xero came in third after FreshBooks and QuickBooks Online - 16 percent of Canadian SMB owners use Xero. Now, consider that the Canadian accounting software “winner” was actually a tie - 22 percent of SMB owners each reported using FreshBooks and QuickBooks Online. This means that there was no winner with a clear majority in Canada compared to the other three markets.

Why is Xero on such an upswing? It entered the cloud software market at the right time for a new target user. Xero was founded in New Zealand by CEO Rod Drury. He worked with his bookkeeper to build cloud-based software specifically for small business accounting. Xero’s inception as a cloud-based solution distinguishes it from QuickBooks, which evolved from a desktop product into the cloud-based QuickBooks Online.

Drury chose to focus on his home market first. Xero was founded in Wellington in 2006 and went public on the New Zealand Exchange just one year later - before it had expanded to any global markets or taken investment from Silicon Valley.

Drury prioritized product and development for the New Zealand SMB market. Once he did expand, his first global markets were Australia and Great Britain in 2008. Expansion to the U.S. didn’t happen until 2011. Today, Xero remains listed on the New Zealand Exchange and Australian Securities Exchange. It also remains headquartered in Wellington with global offices in Australia, the UK, the U.S., and Singapore.

QuickBooks Online and Xero’s product histories give some context for their global popularity. QuickBooks Online set out to own the U.S. accounting software small business market. Its leadership team forecasts 2.2 million users by the end of Fiscal Year 2017.

But we’re not the only ones who notice QuickBooks Online’s loss in global SMB market share. IT Expert Den Howlett analyzed this subject last year:

. The last I heard from Australia was 33,000 customers and that was September 2015. I've not seen any recent figures for the UK but again, they don't turn up in competitive comparisons despite a raft of pricing flip flops and offers of every stripe

Howlett then shared that this is common among U.S. software vendors who build for their domestic market to the exclusion of others. In a market like accounting software - where country-specific tax codes and regulations play a prominent role - skimping in this area is bound to cause a downswing.

So, if QuickBooks Online isn’t the dominant global player, which vendor did Howlett say to watch? His answer won’t surprise readers of this report:

"The obvious name that springs to mind is Xero...

While Xero has grown very well in the U.S. the last year, the numbers are still relatively small, and must be costing them a fortune to acquire. I

n the meantime, Xero has a nice

for small business in the U.S. that it is promoting like crazy and which stands as a healthy competitor to Intuit. My thinking? Watch this space."

Balancing the books is a universal task. So, you’ll need accounting software no matter which corner of the world you live in. Since global GetApp readers prefer Xero and QuickBooks Online, our comparison chart is a strong starting point. It allows you to view each product’s features side-by-side. This will help you learn if one is a better fit for your unique business size, platform of choice (iOS vs. Android), price point, and more.

You can compare other products as well. For example, let’s say you live in the UK and prefer to use accounting software that was built for British SMB owners. You can create comparison charts between two UK accounting software solutions, like SimpleBooks and FreeAgent. 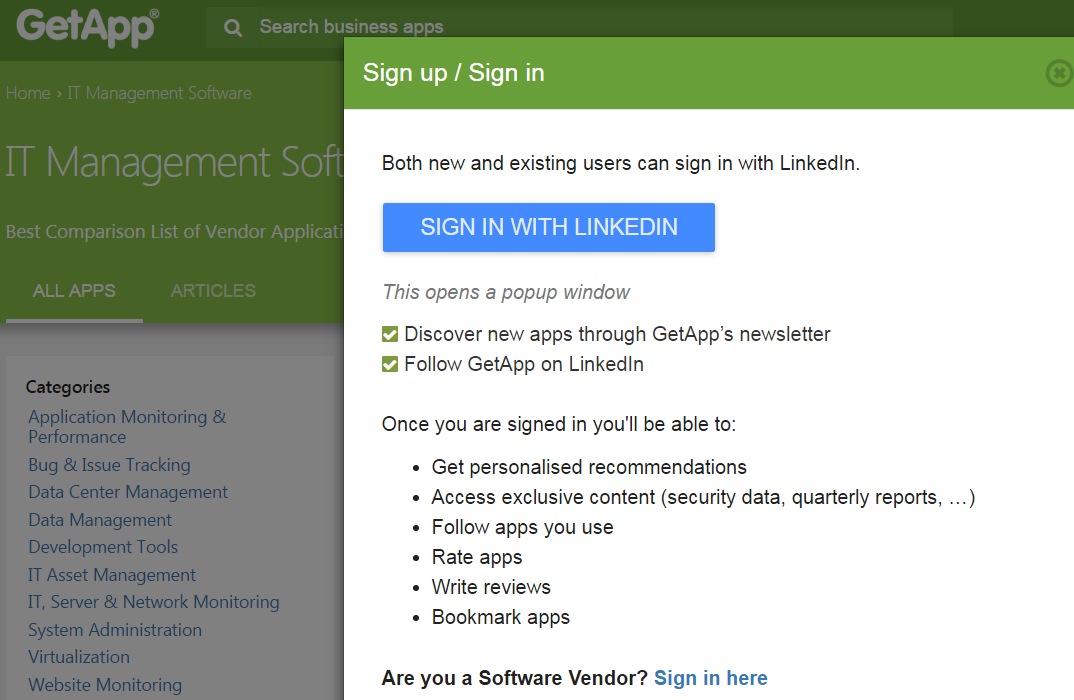 Once you’re logged into GetApp.com, we’ll share which software solutions are the best fit based on the industry you work in, how large your business is, which apps you already use, and more. So, when you search for accounting software using your GetApp account, we’ll show you upfront which software is a match. 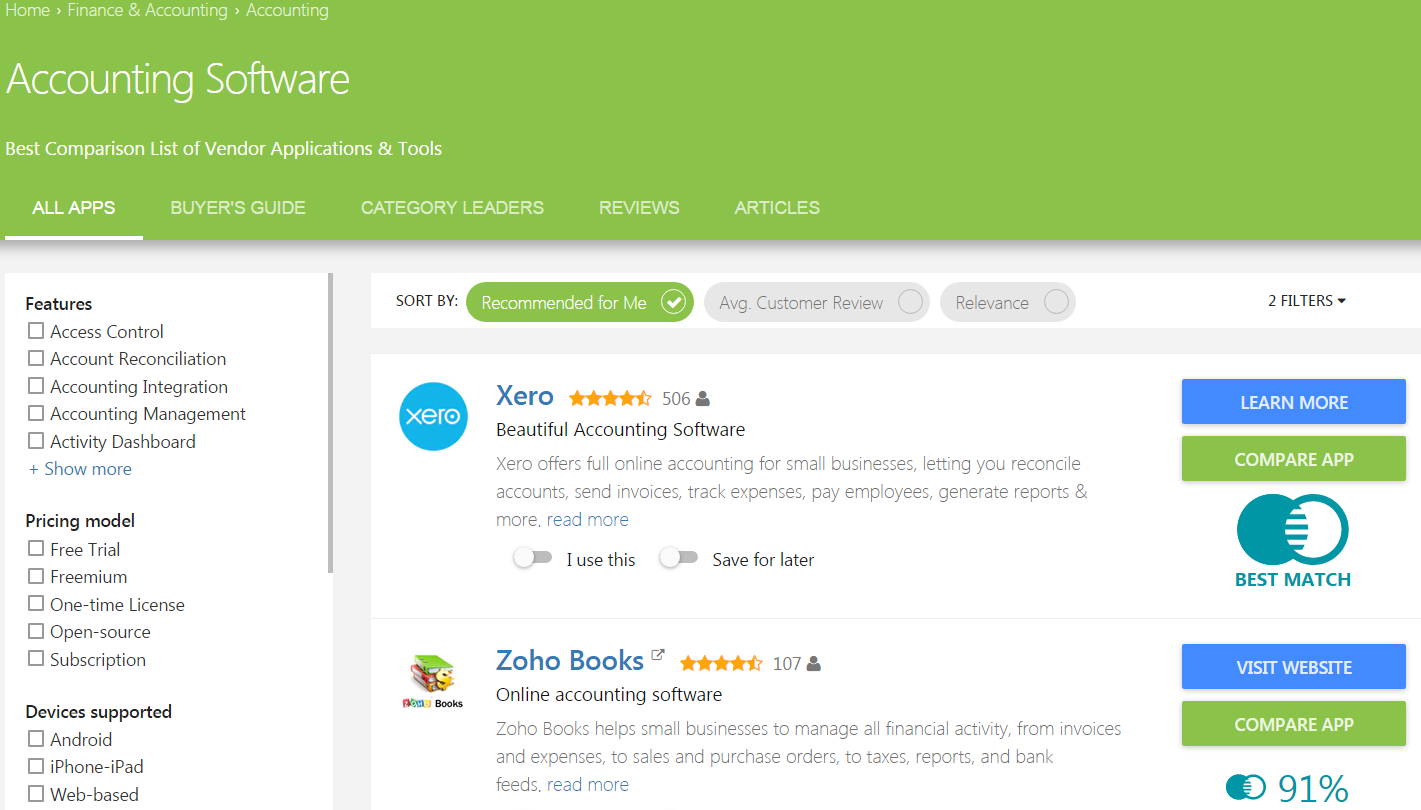