Presenting…Everybody Else: 5 Alternatives to PowerPoint

Powerpoint is the most ubiquitous of presentation software, but it's not the only option out there. Take a look at these alternatives.

It's Tuesday and Tony from HR has yet ANOTHER PowerPoint presentation regarding the proper way to expense your taxi receipts. Although Tony and his tortuous meetings should shoulder most of the blame, you can't help but turn your ire towards Powerpoint and ask yourself, "Aren't there any alternatives to Powerpoint out there?!"

Your presentation prayers have been answered: this article will cover some of the most popular alternatives to Powerpoint, factoring in user reviews and popularity. Whether you are apathetic or turbo like Tony when it comes to Powerpoint, you know that getting comfortable with your presentation software is critical to hold your audience's attention and convey your ideas.

In fact, there's a group of people who absolutely adore Powerpoint. If you are interested in learning the surprising identity of these Powerpoint-loving people, read the next paragraph. Otherwise, don't take the bait and head right down to where it says "Prezi" and start reading.

So, who loves Powerpoint?

That's not a reference to a group of mighty morphin' teenagers with attitude, it's a play on words in reference to the Army Rangers. That's right: the US military loves Powerpoint. In fact, it proved to be so popular (and controversial) that the Wikipedia page for Powerpoint has a section titled, "Military excess in the US." Some people in the military have had enough of the apparently large number of presentations, while others simply can't get enough of the presentations. A staff officer in Afghanistan published a scathing critique of the military's reliance on Powerpoint as well as some pointed things to say about the brass. The article was serious enough that NATO command kicked him out.

Negativity aside, Powerpoint is critical tool for conveying information and ideas in a large organization like a military. Some people love it so much, that it gave birth to the nickname "Powerpoint Rangers." There's even a site for Powerpoint Rangers that has both comical and informative links, as well as presentations that have been used in the past by the military.

Now that you've picked up some pub quiz trivia regarding the military and Powerpoint, let's get onto the main event.

Here are some alternatives to Powerpoint 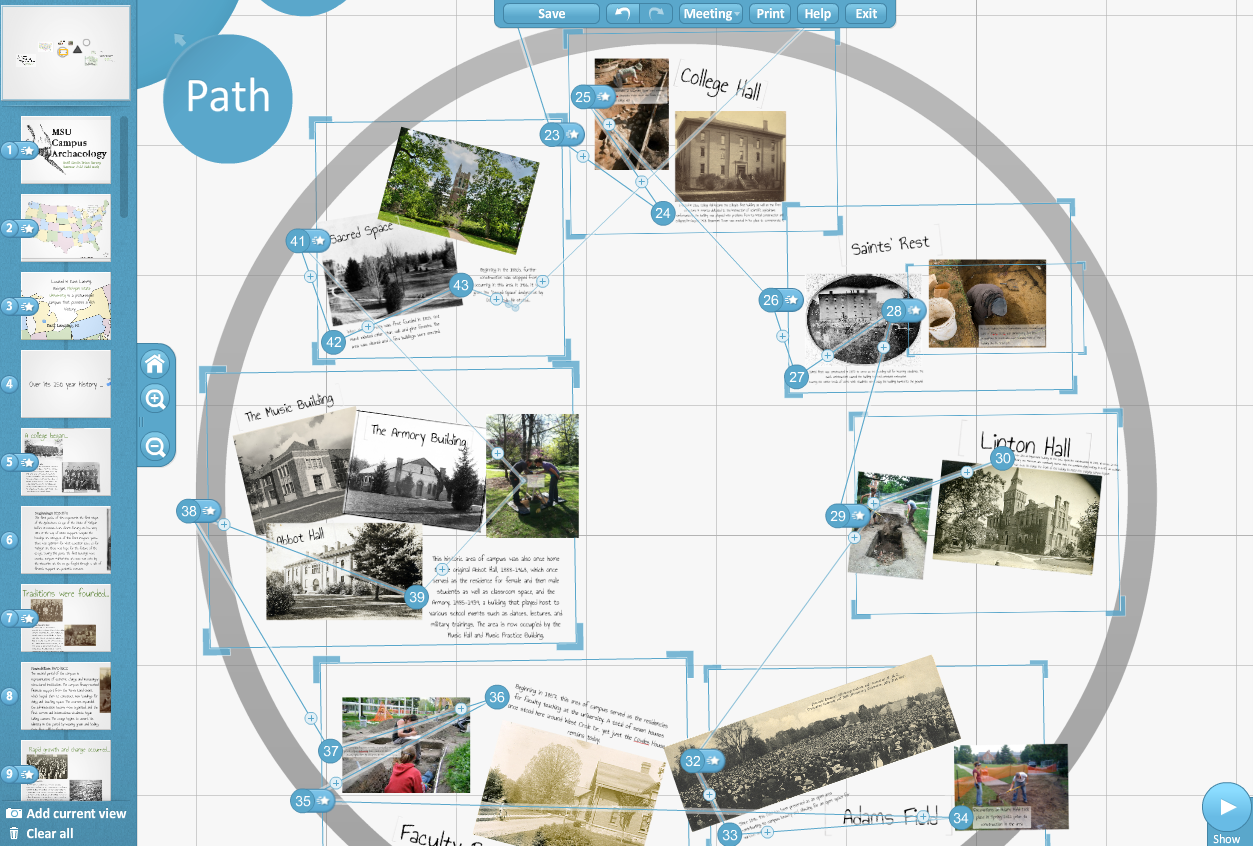 Prezi is well known for its dynamic style of presentations. It's difficult to describe, but instead of thinking of the traditional style of presentations (slides in numerical order), an example in Prezi could be an image of Europe and the presenter move around between countries (instead of slides) to create a more cinematic presentation. Prezi also does a fine job of embedding videos, something that Powerpoint has had a problem with in the past. Prezi also has presentations and temples for you to choose from, which can be modified to fit your presentation (or provide inspiration).

GetApp user Victoria Anniston gave Prezi five stars and writes, "The best part is that the whole presentation is interactive and intuitive which helps in delivering the topic much more thoroughly. Another prominent feature it uses is the 3 dimension based templates and they are simply a killer. Your boss will definitely be impressed with your result. It is cheap with $10 a month for the most basic service. It runs across different platforms and offline as well but a presentation cannot be edited on any mobile device." 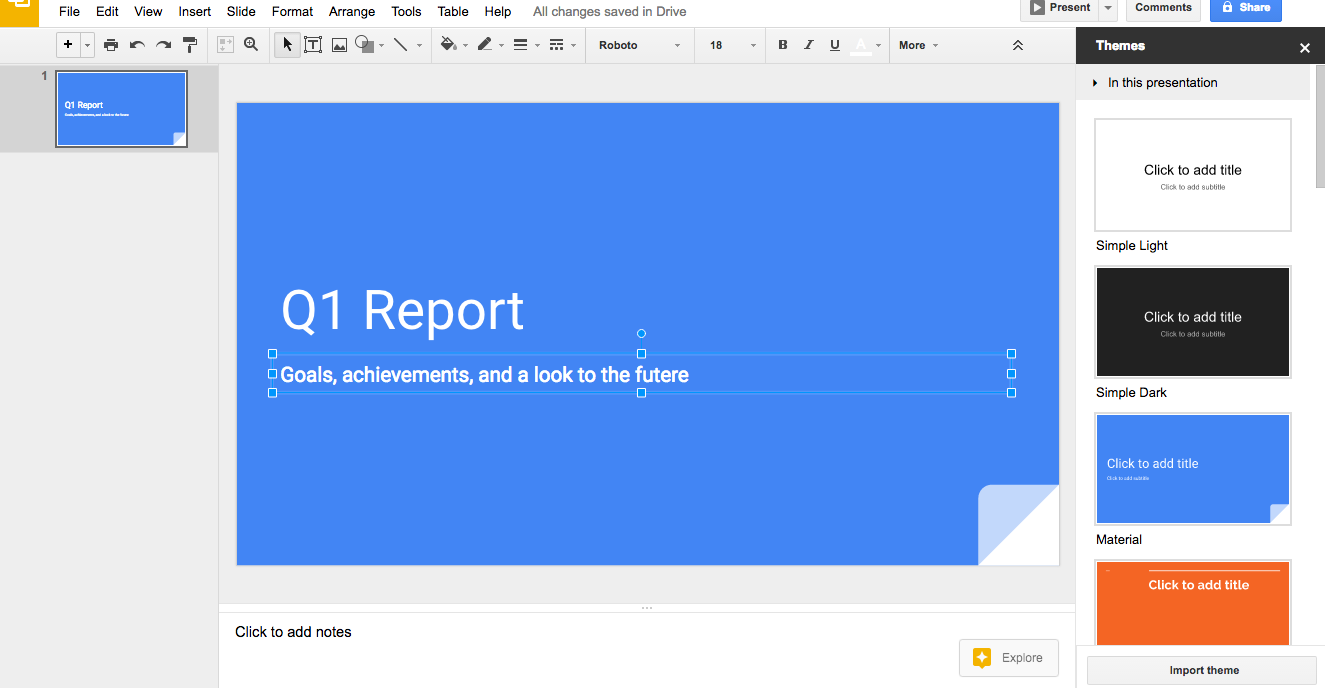 Google Slides is one app within the Google Drive ecosystem (or G Suite for the professional version). It offers much of the same functionality as Powerpoint, except that its emphasis is being based in the cloud, as opposed to Powerpoint which has historically been a piece of on-premise software. Slides shines due to its place within the Google ecosystem. It's easy to search for your presentations (or any other files saved in Drive), and collaborating on a presentation is tremendously easy. You can also rest easy knowing that Google will continue to develop the product and it's likely that the price of it will always stay competitive.

GetApp user William Tate writes about G Suite (which includes Slides), "Our digital agency has been using g-suite when it was still Google Apps for Work. Having our beloved gmail was one thing, but the collaboration possibilities with google docs, google sheets and just google drive as a file sharing tool are endless. Also hangouts as a messaging platform is brilliant." 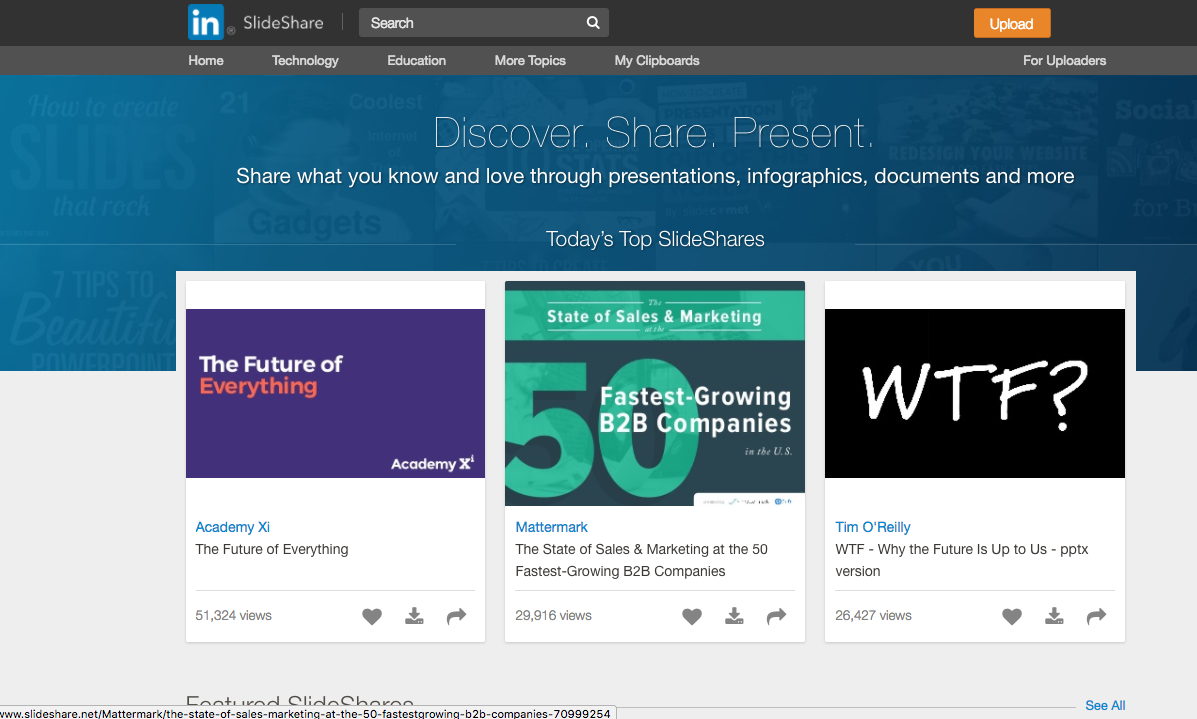 You've most likely come across SlideShare on LinkedIn and thought, "Hey! I didn't know that PowerPoint presentations were embeddable!" There's more to SlideShare than that: it was purchased by LinkedIn in 2012 and can display a multitude of file types including PDF, docs, and videos. It's more of a service to display your presentations, but it's still worth a mention in this list. It's heavily integrated with Linkedin (SlideShare's homepage is built into the professional social network), which could be a factor in your purchasing process depending on how much you love/hate the network. SlideShare's homepage is a sort of YouTube for presentations (Tony would love it) that's a tremendous resource for learning, and worth spending a moment to browse around in. 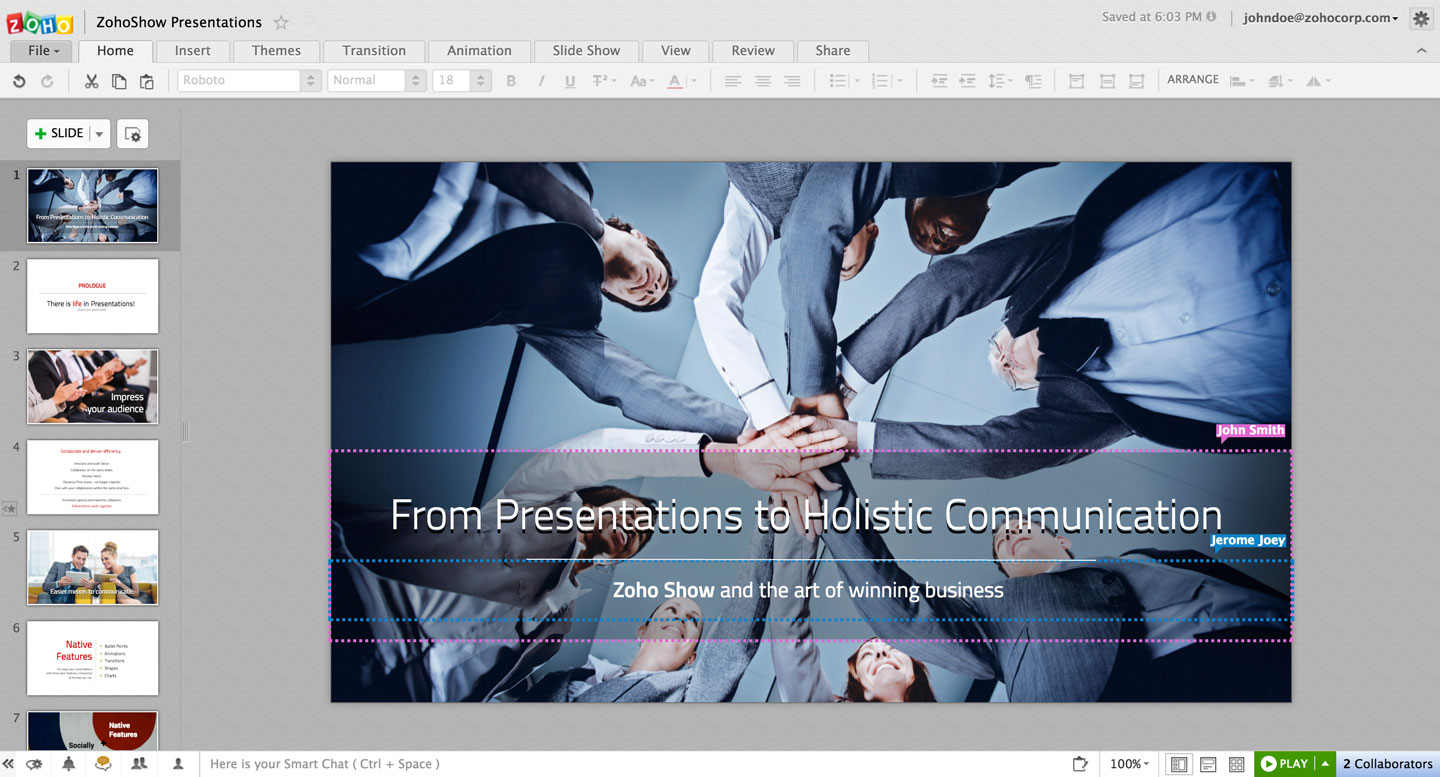 Zoho Show is Zoho's answer to Powerpoint, and it provides reasonable competition. You can make embeddable presentations for blogs and websites, embed YouTube videos, and even import images from Flickr.

Zoho Show includes a lot of collaboration options that make it easy to work together even if you are at a distance. It also has a nifty chat feature that allows you to chat with participants during the presentation. 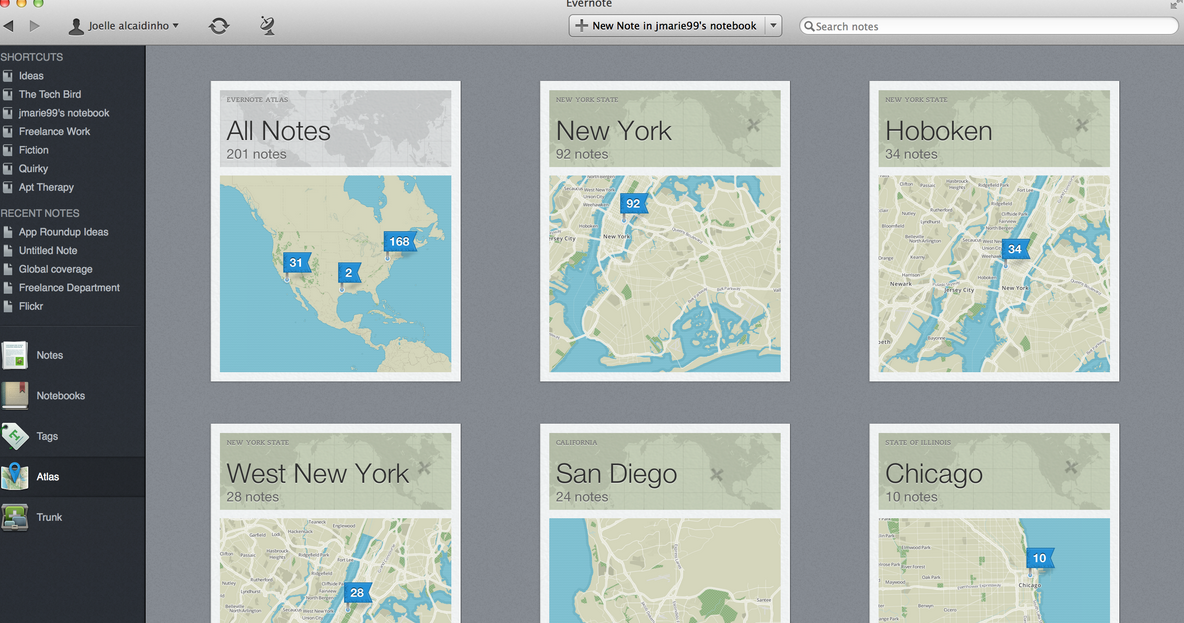 Popular note-taking app Evernote also doubles up as presentation software. If you aren't already familiar with Evernote, here's a refresher: it's an app that become famous because of its ability to work across multiple platforms (include mobile devices) and its beautiful design. What started out to help people organize their lives and feed their creativity has turned into a powerful piece of business software. Its presentation software isn't advanced as the other contenders on here, but it's still functional and used by many. The interface is very drag-and-drop and Evernote encourages you to take advantage of sketching over notes.

GetApp user Brianna Ford writes, "I refer to Evernote as my portable brain because it literally houses everything I need. Thoughts, notes, recipes, bookmarks, swipe files, you name it. Evernote has been a major part of my life since 2009. I started using it to take notes in my college classes, and haven't given it up. I love using it on my flights because the offline notebook option is a lifesaver. The fact that I can clip it for later, set reminders, and share notes with friends just makes it even easier to use. Evernote can be used for personal and professional use. I discovered stacks, where I can organize my notebooks by the types (personal, business). It's available on just about every device you need it on."

That's a lot to take in about presentations

Hopefully, you've had a look at some other software and you've picked up some good advice and tips from this. This article might even be worth sending to Tony from HR (he'll go wild when he finds out about the Powerpoint Rangers) before his next meeting to discuss TPS reports. If you'd like to get more info, check out this side-by-side comparison of the presentation software listed in this article, our presentation software category, and let us know if you have any presentation tips in the comments below.