Beginner’s Guide to Slack and Its Integrations

Slack is a collaboration tool that is aiming to kill email by combining instant messaging, email, and file sharing into one place. Don’t worry if you aren’t blown away: this sounds like a claim by just about any Software-as-a-Service (SaaS) company hoping to be the next big thing. Currently, the company appears to (at least) have the cash backing to live up to the hype and is the fastest company to reach a valuation of $2 billion.

Son of a Glitch

Slack’s got an interesting backstory: for the second time, the team behind game company Tiny Spec had a failing gaming venture on its hands. The game, Glitch, wasn’t picking up lots of users but its team had been using a handy instant messaging and file-sharing communication app. That app would go on to become Slack.

A closer look at Slack

Slack ranks first in GetApp’s ranking of collaboration software due to its strong scores in media presence and mobile app compatibility, as well as perfect scores in user reviews and ratings and integrations. 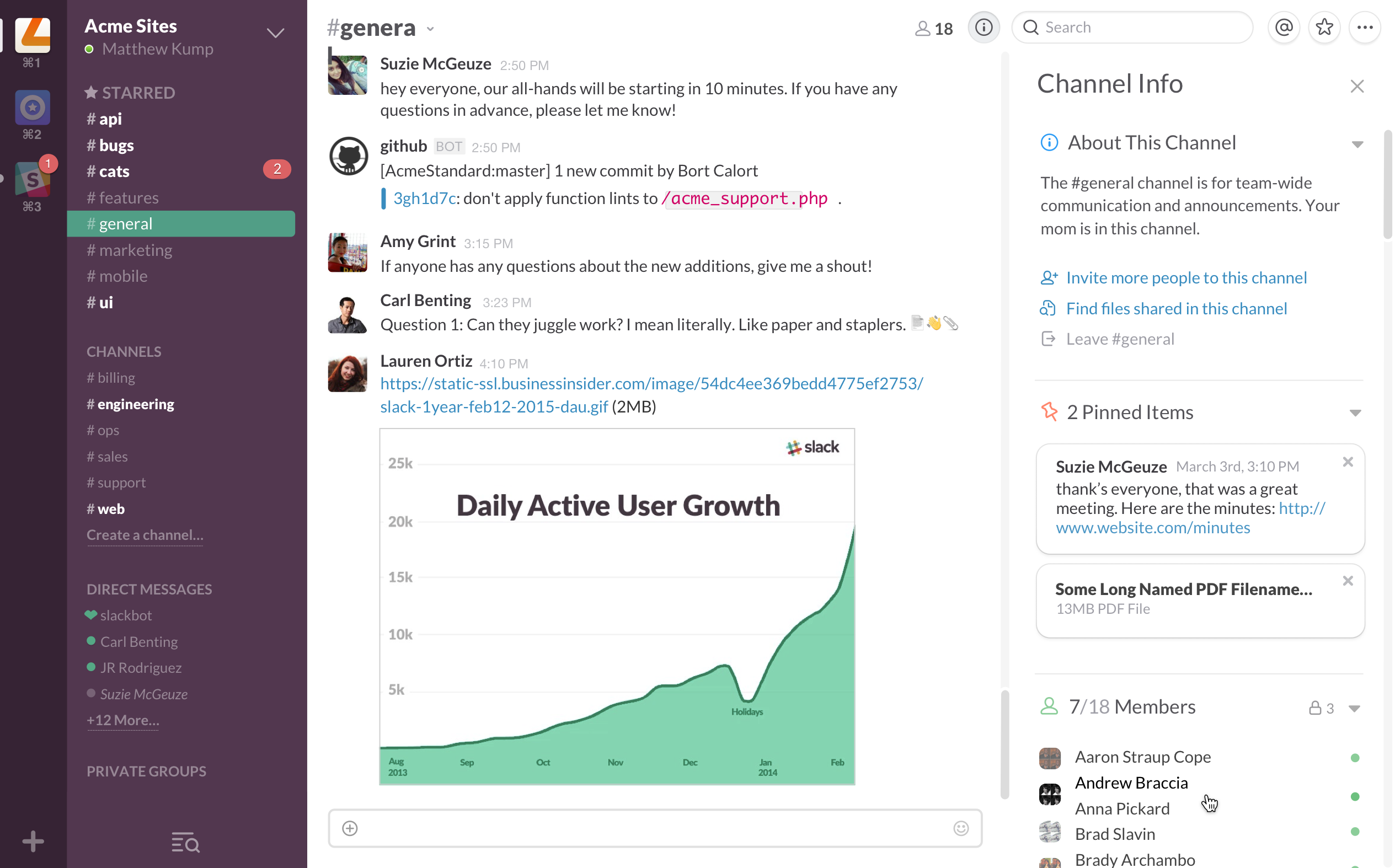 In terms of user experience, Slack’s intuitive design is part of the reason that has made the app so popular. If you’re familiar with any instant messaging system, Slack should be familiar. Direct messages and channels, which are basically chat rooms, are listed on the left-hand side of the screen. The rest of the screen is devoted to the messages. Attachments are displayed in the messages with a small preview. It has got an incredibly minimalist design, so despite the number of integration options, nothing feels too busy or distracting. For companies that are interested in transparency, Slack offers the ability to make all communication visible.

Looking at our user reviews, we can take away some pros and cons for Slack:

Slack’s pricing is straightforward and is divided into three different plans: Free, Standard, and Plus, with an Enterprise version coming out later this year. The Free plan comes with 5GB of total storage, can search and browse 10,000 of the most recent messages, and 10 service integrations. The Standard version costs $6.67 per active user per month billed annually (so that’s approximately $80 per year per user), plus $8 billed monthly for the service. The standard version comes features such as unlimited integrations, an unlimited archive to search, mandatory two-factor authentication, and user groups.

The Plus version has the same perks as the standard version, but also comes with 24/7 support with a 4 hour response team as well as more technical customization and integration: SAML-based single sign-on, real-time Active Directory sync, and 99.99% guaranteed uptime SLA. In terms of pricing, the Plus version costs $12.50 per month per user billed annually ($150 per user per year) as well as a $15 monthly charge.

Fun Fact: This isn’t the first time the Slack team has found success through an unsuccessful gaming venture: 8 years prior the (more or less) same team had been working on a game which had clever photo sharing technology. That technology was to create ultra-popular photo sharing service Flickr, which was ultimately sold to Yahoo.

Karan Singh Bir writes on GetApp, “Slack is the kitchen sink of collaboration tools - it’s the glue that binds everything together in our organization. We use it for our college student group, but I also fire up an organization for hackathons and mini-projects. Combining the integrations with Slack’s fantastic Search feature makes this a great value product.” He also notes under the “Pros” section of his review, “Integrations with Google Drive, Dropbox, Github, Hangouts, and Giphy form the icing on a juicy cake.”

What users think about Slack’s integrations

Slack has an overall rating of 4.58/5 based on 669 user reviews. and many users comment that they love its integration with other apps.

Michael Meluso, cloud specialist at JHC Technology, says “I love the custom integrations. I can turn Slack into a messaging center for my team by integrating apps we already use. Message notifications are highly customizable, and the solution is portable as a web app, desktop app, or mobile app. Channels allow you to organize your messages and set topics.”

“The free integrations that it provides with the paid plan are super useful and helps us eliminate lot of switching back and forth between communication apps,” says reviewer Tejaswi Raghurama, Growth Hacker at Pipemonk. “My personal favorites are the Email, Twitter, and /rss feed integrations.”

How well Slack integrations compare to other apps

Some of the most popular integrations for Slack on GetApp include Zendesk, Zapier, Trello, and MailChimp.

Where to go from here

You should have a sense of Slack at this point, but in case you don’t, let’s go over the highlights.

Slack is good for people who want an app that requires little training, centralizing your emails and messages, and lots of integrations.

Slack isn’t great for video and audio calls which aren’t available yet and a pricing system that can get expensive at higher tiers.

If you are interested in finding out more about Slack, make sure sure to check out our alternatives page which will give you an even more-detailed overview of Slack, as well as its competitors.