Box vs Dropbox for Small Businesses: How Do They Compare?

What's the difference between these two apps? We're breaking down features, pricing, and more to help you decide Box vs Dropbox for your small business.

When was the last time you organized the files on your desktop or hard drive? I wouldn't be surprised if you don't know the answer. Keeping data and files organized is something you just don't think about … until you can't find that one you really need.

To avoid issues with productivity loss due to disorganized or difficult to find files, businesses often turn to file sharing and storage solutions. File management tools are also useful because they allow users to store files in one centralized location, making them easier to access and share across teams.

There are plenty of apps for small businesses that offer these capabilities, but it may not be immediately obvious how they differ, or which one would work best for you. To help, we're comparing two popular options side-by-side: Dropbox and Box.

We'll compare them around the following parameters:

When comparing software pricing, you must also look at which features are offered at each price point, so you can ensure you're getting all the features you need.

Below, we'll take a detailed look at pricing for these two platforms' business offerings, and we'll also look at some of the key features you get at each price point.

Box and Dropbox both offer free trials as well, which is another helpful way to get hands on and find out which of these apps would work best for your specific needs.

Box's business plan offerings include: Starter, Business, and Enterprise. All three plans are billed monthly, and each offers a two-week free trial.

While many users who have posted reviews on GetApp are satisfied with Box's pricing, a few users feel that it's a bit pricey for small businesses.

Reviewers also suggest that the lower tier plans don't offer as much value for the money, since dedicated customer support is only available as an add-on.

According to GetApp reviews, many users find Dropbox's free plan for individuals, Dropbox Basic, to be satisfactory, as it offers limited storage. Some of them point out that the pricing for Dropbox's business plans is a bit steep as compared to other storage applications.

Data storage and file sharing needs vary dramatically from freelancers to SMBs to enterprises. Here, we'll take a look at how the different plans offered by Box and Dropbox serve different business sizes, and how each product could potentially scale with you as your business grows.

Box offers three plans for businesses, allowing organizations of all sizes to choose the plan most appropriate for their current needs, while also providing the opportunity to scale.

Box's Starter plan is appropriate for small businesses or small teams with between three and ten people, as long as you don't need more than the 100 GB secure storage space or 2 GB file uploads that are included.

However, users that upgrade to the Business plan jump to an unlimited number of users and unlimited storage space, and file uploads increase to 5 GB. The Business plan also adds customer branding and data loss prevention, so it's a great option to consider as your team grows.

The Enterprise plan would be most useful for larger companies with remotes teams or those that need client-facing capabilities, as it adds full content visibility and management, unlimited external collaborators, and a the option to create a password policy.

Users must upgrade to the Advanced plan for unlimited storage space, as well as to add some other more advanced features such as file tracking and domain verification. The Advanced plan also provides live phone support during business hours.

Reviewers on GetApp say that the Enterprise plan offers a good value for the money; it includes a dedicated support manager, advanced training, domain insights, and more.

We know that both Box and Dropbox allow storage and management of content. But here, we'll look more in-depth at individual features to help you differentiate them from one another.

All three plans in Box's business offerings include:

In addition to those features, the Enterprise plan offers advanced features such as full content visibility and management, workflow automation, document watermarking, the ability to add metadata, and custom templates.

One attribute in particular that Box users like, according to the reviews, is its usability and simple file sharing capability. However, some users have expressed concern over difficulty in uploading large files. 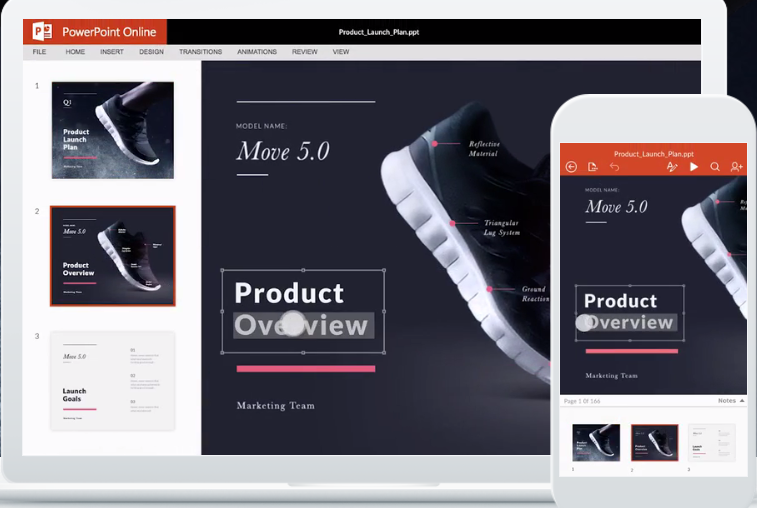 Dropbox also offers a range of features in its Standard plan, including

The Standard plan also provides access to Dropbox Paper, which allows users to create and collaborate on projects, as well as storing and sharing.

GetApp reviewers like Dropbox for its simplicity, speed, and ease of deployment. Many reviewers also say that the application is mobile friendly and can easily integrate with other applications.

However, several users say they find Dropbox's desktop application slow and complicated to use. Like Box, sharing of large files is also a problem cited by Dropbox users. Few of the users have also addressed that Dropbox application lacks end-to-end encryption which can be a threat to their data. 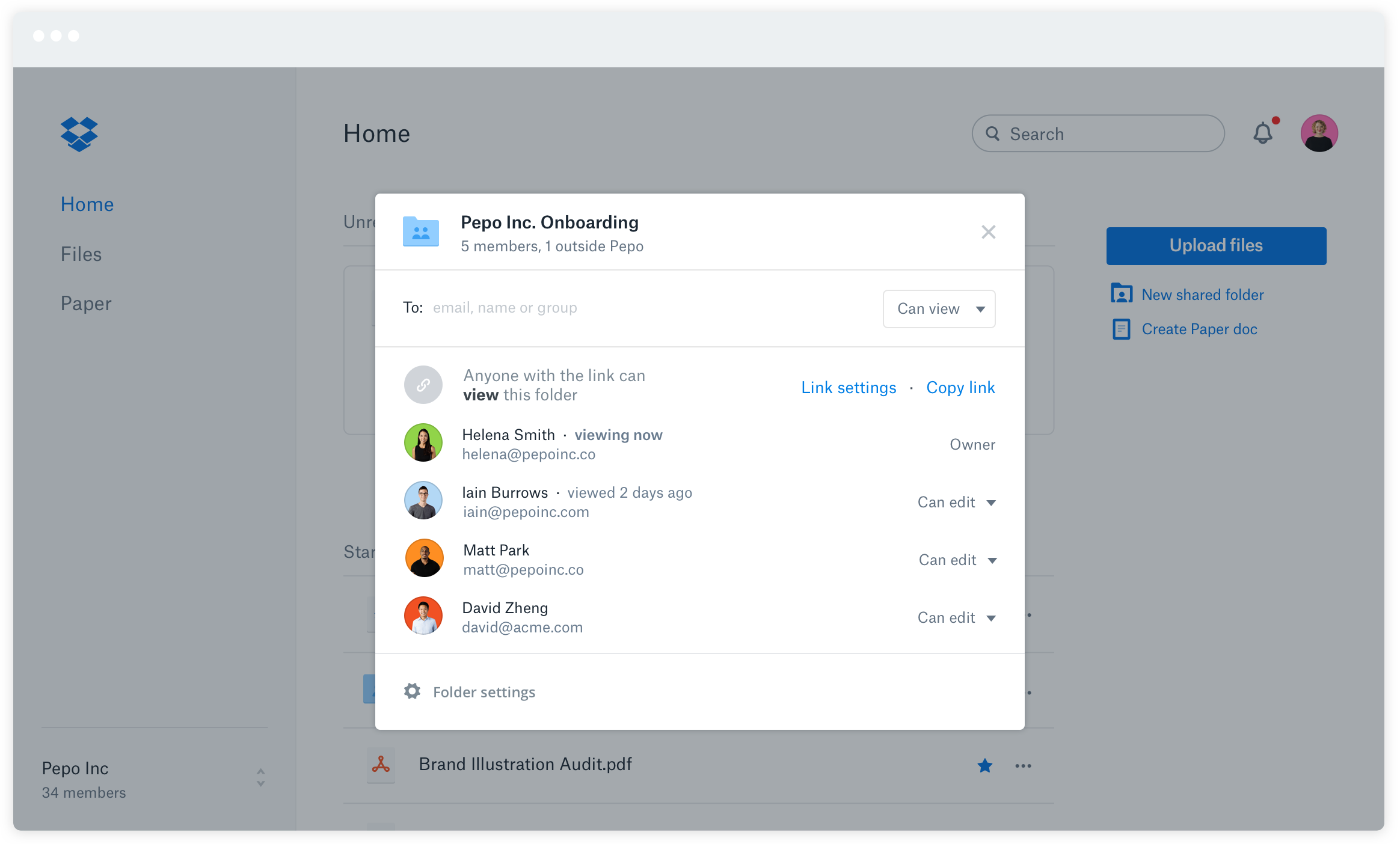 Both Box and Dropbox integrate with a variety of other software programs you may already be using. Integrations between different types of business apps are useful for increasing productivity and efficiency as you scale your business, as the data is already synced, saving you from manual data entry.

In this section, we'll take a look at some notable integrations for each.

The Box API allows for custom integrations by developers, so Box users can edit, share, and modify documents and folders within Box itself. This allows you to have a single storage space and data access point, no matter which device or application is in use.

Box integrates with nearly 200 apps, including project management apps such as Slack and Asana.

Users of Salesforce Sales Cloud and Zoho CRM can integrate those platforms with Box to centralize their data. Other notable integrations include Hootsuite for social media management and payroll software, Zenefits.

Many GetApp users claim that integrations with CRM, ERP, and other business applications are a big plus. In particular, they mention the convenience provided by integrations with Microsoft Office (on desktops) and Salesforce.

However, some reviewers say that Microsoft Office integration on Mac is not as extensive, and they'd like to see an integration with Microsoft Dynamics suite. 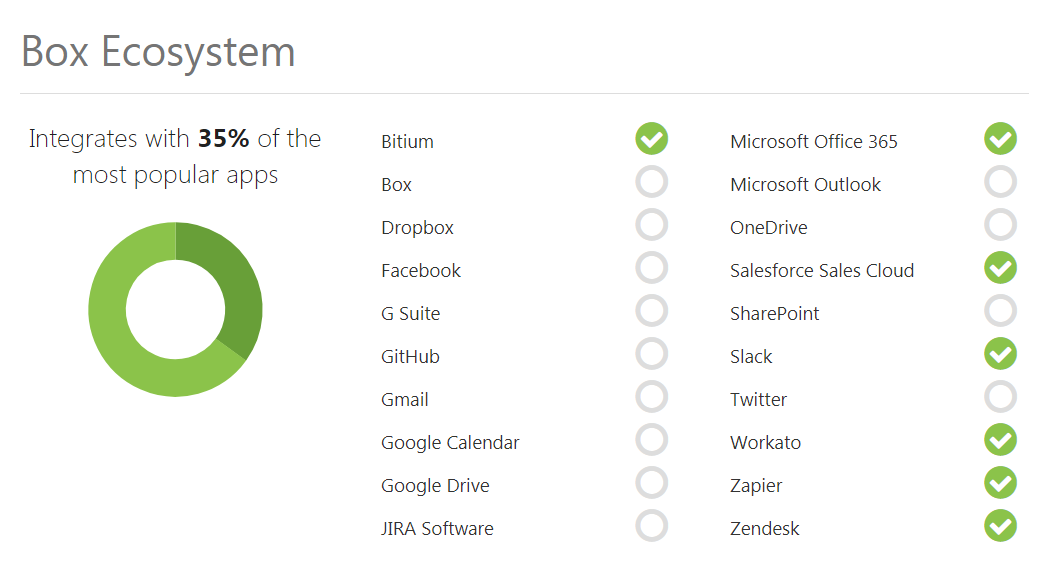 Dropbox integrates with over 300 apps, including:

Dropbox's ability to integrate with several popular apps is also something that is praised by GetApp reviewers, though many users mention that they'd like to see additional integrations with other specific cloud-hosted storage applications so as to easily import files with simple clicks.

According to reviews, the API integration could be better for Dropbox, but integration with iOS is a plus, as it allows users to upload any file to Dropbox storage right from the Safari app. 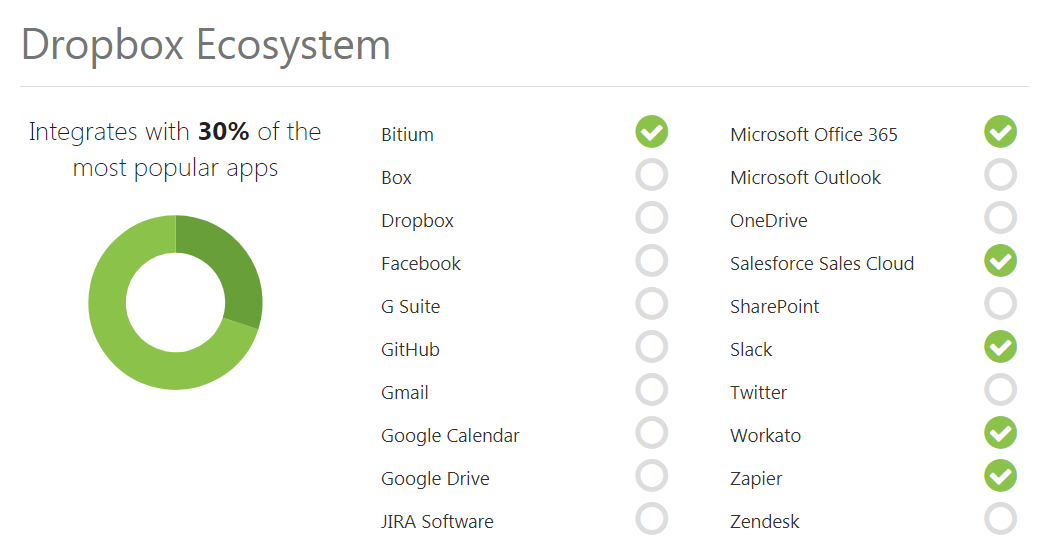 Dropbox and Box both offer Android and iOS apps that allow you to collaborate on and share files while on the go. We'll look at the features of each platform's mobile apps, as well as reviewers' opinions of those apps below.

Both apps allow users to store, manage, access, share, and edit documents with 10 GB of free cloud storage. You can preview more than 200 file types and even tag your colleagues in a comment to give feedback. Some other features include real-time search, the ability to share large files with a link, and feed updates to find recently viewed or edited files.

Reviewers on GetApp have mixed sentiments about the Box's mobile apps. Some find them quick and easy, while others find the mobile sync is quite slow. Some users also complain about the in-app editing tools, saying they can be buggy. 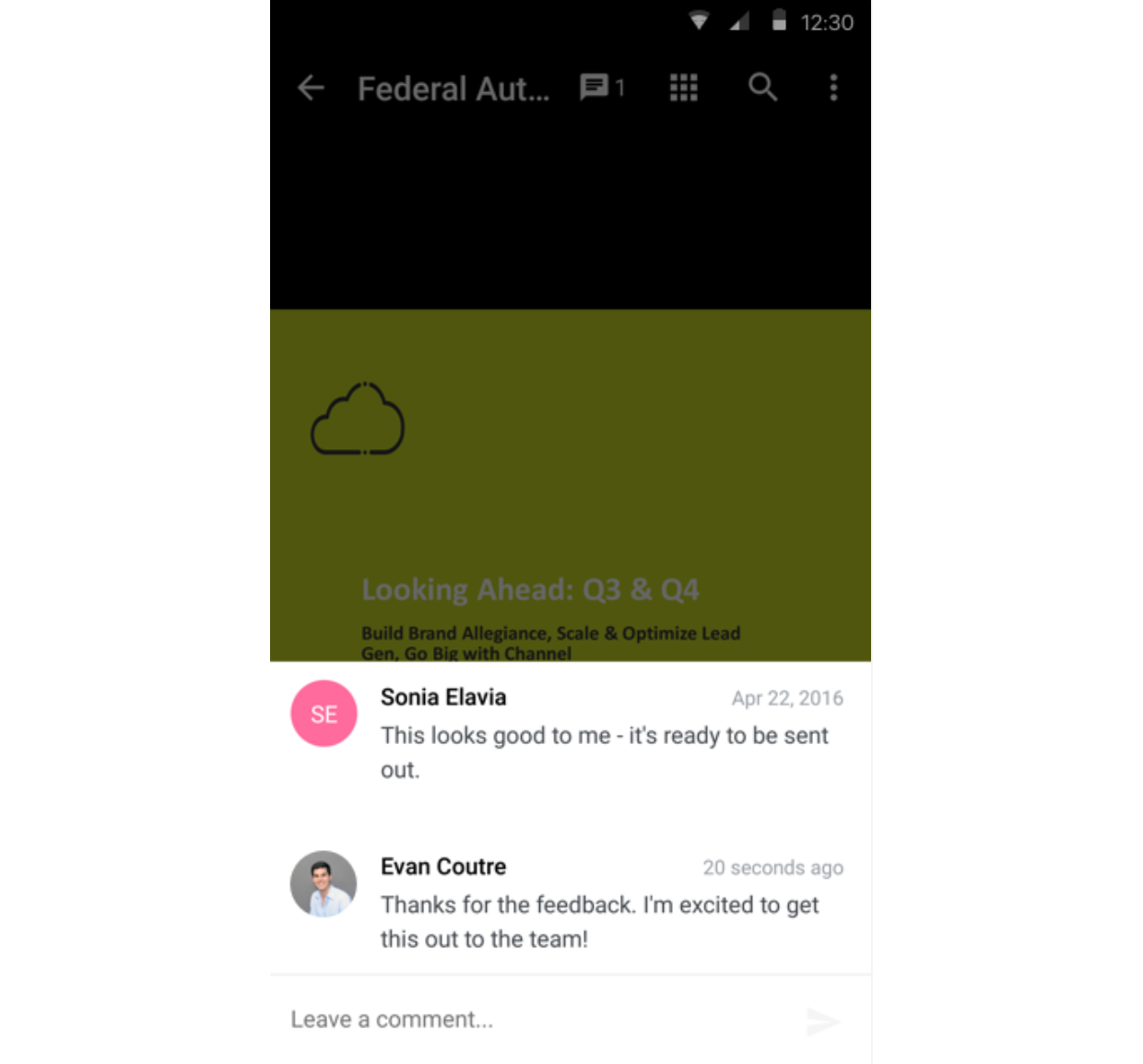 Dropbox's mobile app has a 4.4 out of five rating on Google Play and 4+ out of five on Apple's App Store.

Dropbox for Android and iOS let you share folders with others and collaborate while on the go. You can turn receipts and notes into PDFs with the document scanner. You can also sync, share, and provide feedback on documents.

Some reviewers on GetApp say that one of the best things about Dropbox is that it allows sharing of large files, even from mobile devices. However, some users mention that the app is a little buggy, and they've experienced minor crashes or issues with the real-time file sync. 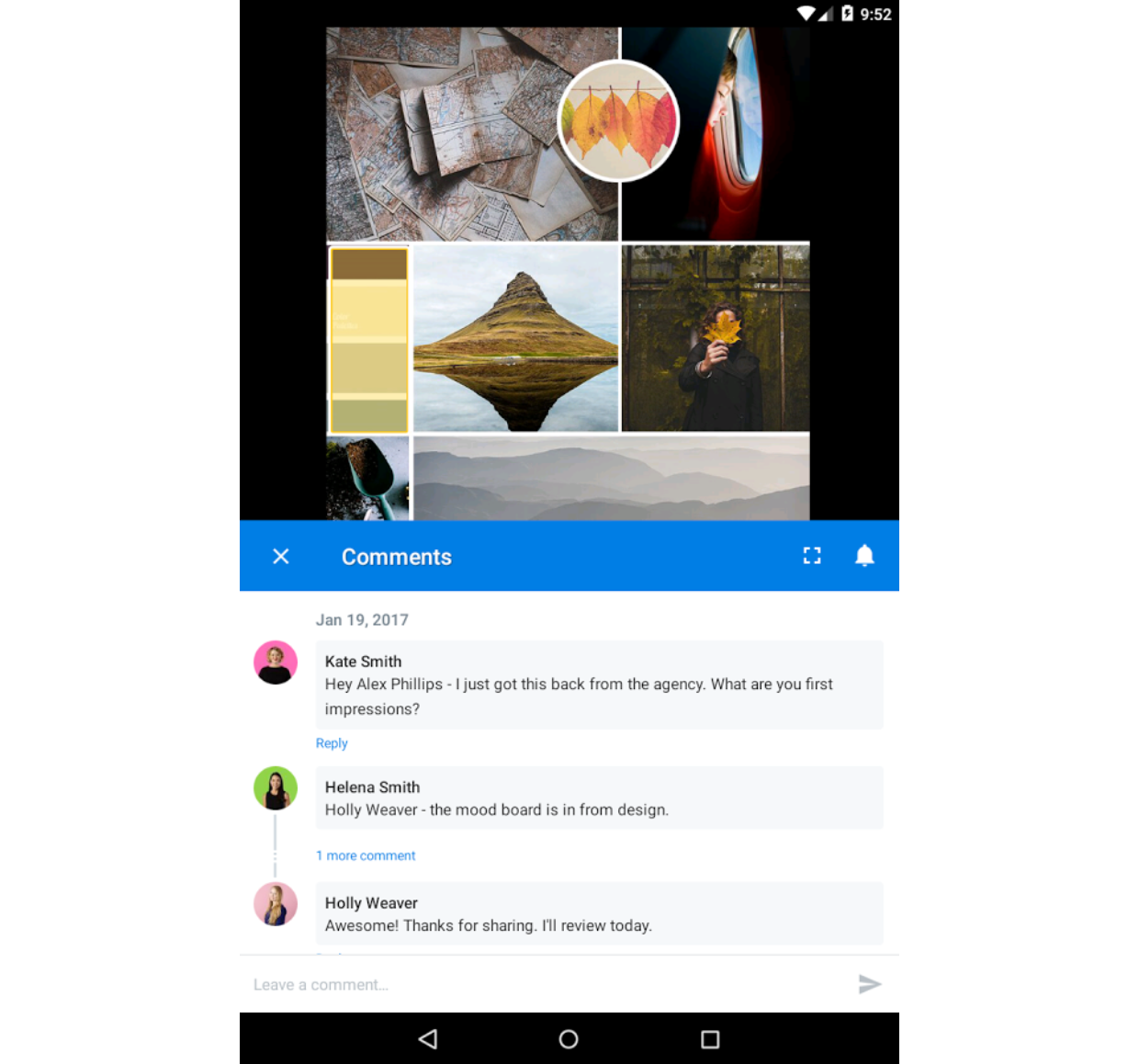 Customer support can include live chat, phone support, technical trainings, community forums, online knowledge bases, and more. Support should be available while implementing a new tool, as well as throughout the period that your team uses it.

While both of the tools covered here do have a dedicated customer support department, they differ quite a bit in what is included with the various business plans.

Box offers a knowledge base with articles that cover common issues experienced by users. It also provides tutorials for free on a shared platform called Box University, available to all users with an account.

A third option for support is the Box community, where users can post questions and concerns about troubleshooting and more.

Users on GetApp say in general that Box has a responsive support team, and they also find the support forums to be helpful in customizing Box to fit their needs.

Dropbox also offers a user community where users can post questions, start discussions, and answer on related topics. It also has solution based articles on common issues faced by users, similar to Box.

Users can also get support with Dropbox's guided troubleshooting tool.

Reviews of Dropbox's customer support on GetApp are mixed. While many reviewers praise the customer support, some others complain about long response times. Some users find that the live chat support and online customer support is readily available, while others feel that it lacks sufficient support features.

Box vs. Dropbox: Which one is right for your small business?

Hopefully, this breakdown will help you make a better decision about which tool might better suit your business's needs. For more help, you can also check out our comparison page on GetApp to get an in-depth view on features for both the apps. You can also see Box and Dropbox compared with other collaboration software here.