Workplace by Facebook is the media giant's answer to the social software for business space, but can it thrive in an already stable market?

Despite the collaboration and social enterprise space being a stable one– big names like Salesforce Chatter and Microsoft Yammer dominate the list, making it hard for anyone to get in edgewise– Workplace by Facebook seems to be making headway, in part thanks to the latter half of its unmistakable name.

After beta-testing with companies like Booking.com, Columbia Sportswear, and Danone, Workplace is proving that the social networking giant can play with the big boys went it comes to business software. Adding tweaks including a clear and distinct separation between personal and professional Facebook accounts; a very noticeable ad-free interface; and a swap out of the iconic Facebook blue for a less provocative shade of grey, has ensured that Workplace has a distinct identity separate from its time-killing companion.

Of course, straying too far from the original would lessen its appeal. Similarities to Facebook include a newsfeed, chats, groups, trending posts, and live video, as well as a highly familiar mobile app for iOS and Android. It’s also got a bunch of business-focused features too.

Less than a year since its official launch, I think Workplace by Facebook has a shot at becoming a big player in the enterprise social networking space. Here’s why.

Half the battle in the competitive world of cloud-based software is getting your name on the map. In an era where everyone’s clawing to outshine the next guy, Workplace’s big advantage is not only having the Facebook name behind it, but also having Facebook’s plethora of experience.

In an interview with TechCrunch last year, Workplace by Facebook (then called Facebook at Work) project manager Lars Rasmussen said that Facebook’s biggest strength was its one billion strong active user base, which it spent ten years collecting feedback from to create a product that could be adapted for different use cases. With that number now close to two billion, Facebook’s got a huge advantage when it comes to accessing an unprecedented amount of user feedback for creating new products. In terms of Workplace usage numbers, Facebook reports that Workplace is already being used by 14,000 organizations since its launch in October, who have created over 400,000 working groups on the platform. 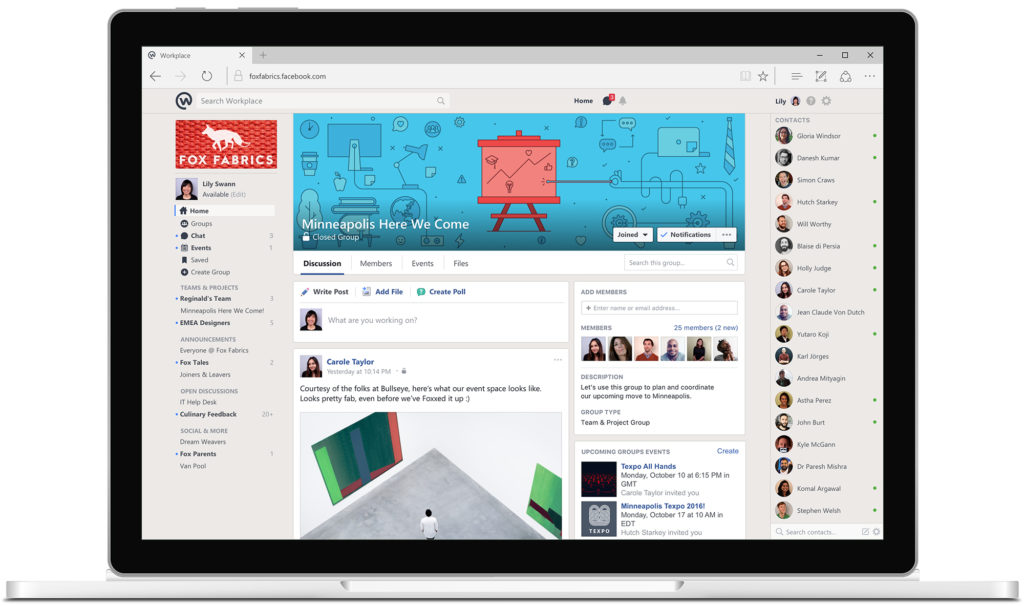 Similarly, knowing the name also means knowing the product– if you’ve used Facebook, you’ll know how to use Workplace. The familiar interface and layout of features is almost identical to that of Facebook, making it easy for staff to pick up and adopt, a challenge not easily overcome when it comes to business software.

Between frequent changes to its privacy policies, manipulating user moods as part of a psychological experiment, and selling user data for advertising, Facebook’s track record with privacy and security has been questionable at best.

What’s been one of the biggest hurdles for convincing security-minded businesses to use Workplace, however, has been addressed head-on by Facebook. In fact, it’s dedicated a whole section of the Workplace by Facebook website to explaining its security and compliance protocols. These security features include company ownership of data, SOC3 certification, SOC2 certification for premium users, and certification under the EU-US. Privacy Shield Network.

In the normally complicated world of SaaS pricing, Workplace by Facebook has a brazenly simple pricing structure:

This makes the cost of entry relatively low for businesses who want to get started with Workplace (compare this to Slack, which charges $6.67 per active user per month).

The biggest appeal of Workplace’s Work Chat are its mobile apps for iOS and Android, which allow for communication between users on a familiar platform (Facebook counterpart Messenger currently boasts 900 million monthly active users).

According to Gartner analyst and Research VP Mike Gotta, Work Chat is likely to be the breakthrough feature of Workplace by Facebook. Says Gotta, “as far as mobile – Facebook will support mobile access scenarios and there is room for companies to look at its Work Chat for group messaging. We believe there is a “sleeper” play for Facebook to position Work Chat as a Slack alternative. Facebook is investing in machine learning and APIs for its consumer messaging application and we believe that this will carry over for Work Chat.” 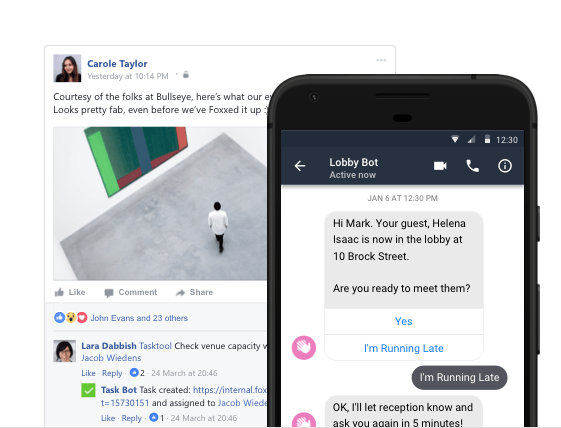 Similar to Slack, Facebook’s also added bots to Workplace, allowing for more automation of repetitive tasks. Bots can do anything from finding someone to help with support requests, to notifying a coworker if you’re going to be late for a meeting.

Because the need for social software isn’t a business priority, one of the determining factors for actually implementing it is its ability to integrate with other business processes. Despite starting out slow on the integrations front, Workplace has added integrations to other powerful business software in order to extend its functionality.

The biggest set of integrations it boasts now are for file storage (OneDrive, Box and Dropbox) and bots (Avaamo, Converse, Korei.ai, Pullstring, and TheBotPlatform), but it also integrates with other big-name products and suites include Microsoft Office, G Suite, and Salesforce. While it still has some work to do in the integrations department, an API means that customers can build their own integrations as Workplace continues to build out its offering.

Workplace seems like a natural move for Facebook, who isn’t one to shy away from venturing into unchartered territory, albeit to very mixed results.

The result here is still unknown, but Facebook seems to be making strides in its quest to be a leader in enterprise social networking software. As Gotta points out, however, there’s still room to grow.

“[It’s] an option companies should monitor, and consider in a limited fashion based on needs expressed by corporate communications and HR to address general employee engagement goals (e.g., culture, onboarding, retiree/alumni, internal clubs and other community-building efforts)…”

This article was originally published in March 2015, and has been updated to reflect new features and data about Workplace by Facebook.