How to Find the Right Infusionsoft Integration

What is Infusionsoft, and which Infusionsoft integrations will help you get the most out of this sales and marketing software?

Infusionsoft is a powerful solution devoted to helping small businesses get the most out of their sales and marketing efforts, and through its integrations, you can power up the software to work with other tools in your company's app stack.

Founded in 2001 in Arizona, Infusionsoft began as a sales automation platform, adding more features after multiple rounds of seed funding totaling $125 million by 2014.

Now a fully fledged cloud software for marketing and sales automation, Infusionsoft has climbed to the top of many best software lists including GetApp's ranking of top marketing automation solutions. Infusionsoft has also topped the list for their outstanding company culture, being named one of the 100 Best Workplaces for Millennials and one of the Top 100 Best Workplaces for Women in 2015.

Having transformed since 2001 into one of the leading sales and marketing apps on the market, Infusionsoft has also matured in terms of which software you can use with it, and if you're a first-time user of the software, Infusionsoft integrations are an important consideration for your business.

Below, I'll go through what Infusionsoft is, the range of Infusionsoft integrations, what users think, and how its competitors stack up.

Infusionsoft aims to offer a variety of functions that can streamline the sales and marketing process for small businesses. Key features include a CRM to manage contacts; marketing automation to nurture leaders; email marketing to send campaigns; and eCommerce for managing order pages, billing, and collections, among other functions. 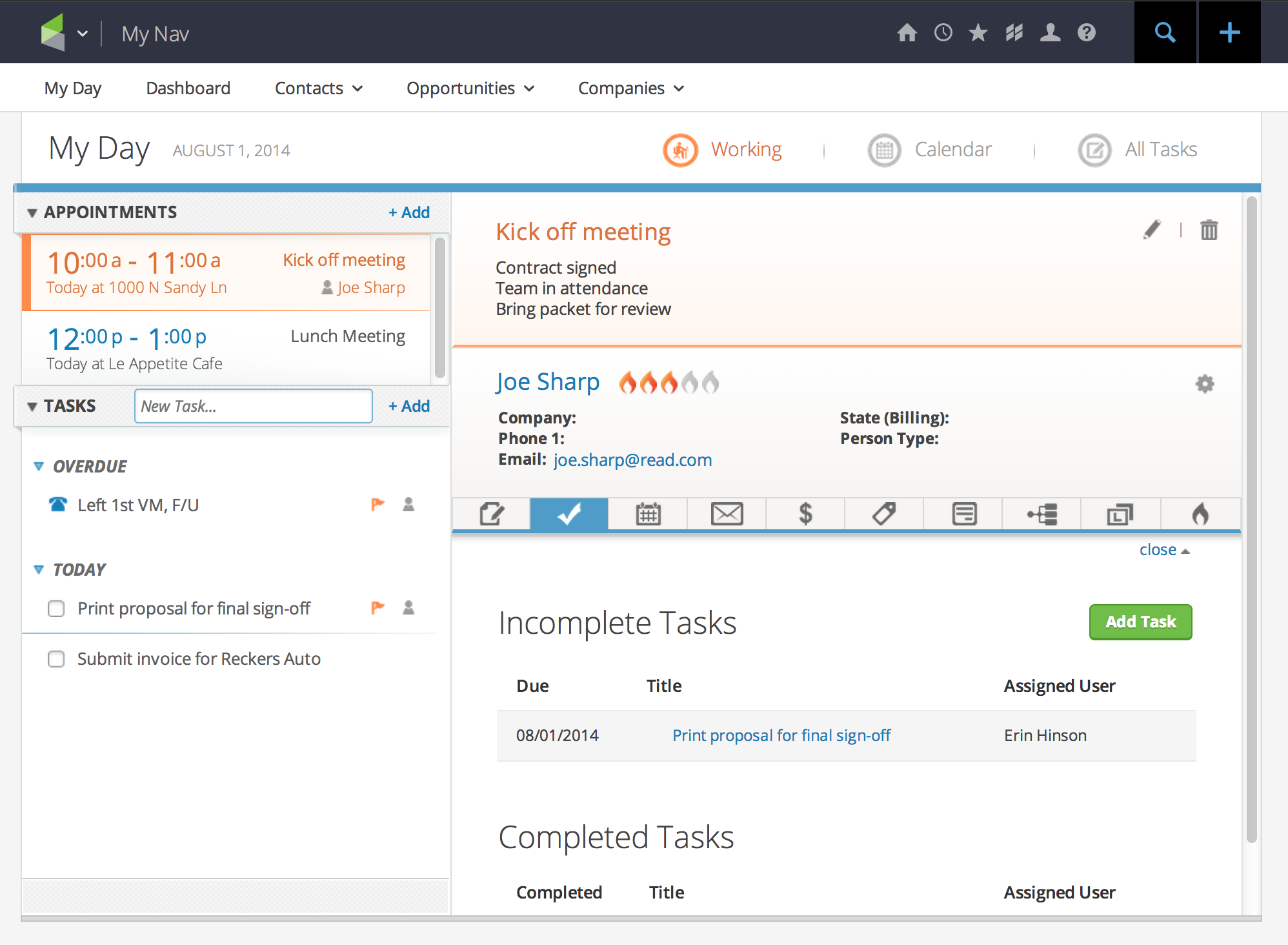 With these robust features, pricing plans vary, ranging from $199/month to $599/month. For its $199/month essential plan, you'll get contact management and marketing automation for 2,500 contacts and three users, while its $599/month team plan offers additional sales automation and e-commerce functions for 20,000 contacts and up-to 10 users. 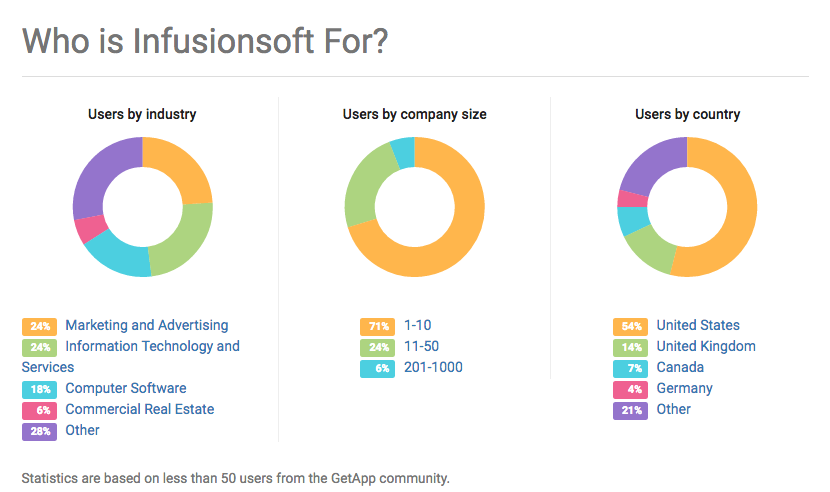 Notably, Infusionsoft also supports Zapier, an integration platform that lets it connect with hundreds of other apps. Although it is missing native integrations with bigger names like Mailchimp, and Google Apps for Work-all key software for small and growing businesses- Zapier integration helps enable the syncing of some of these solutions with Infusionsoft. 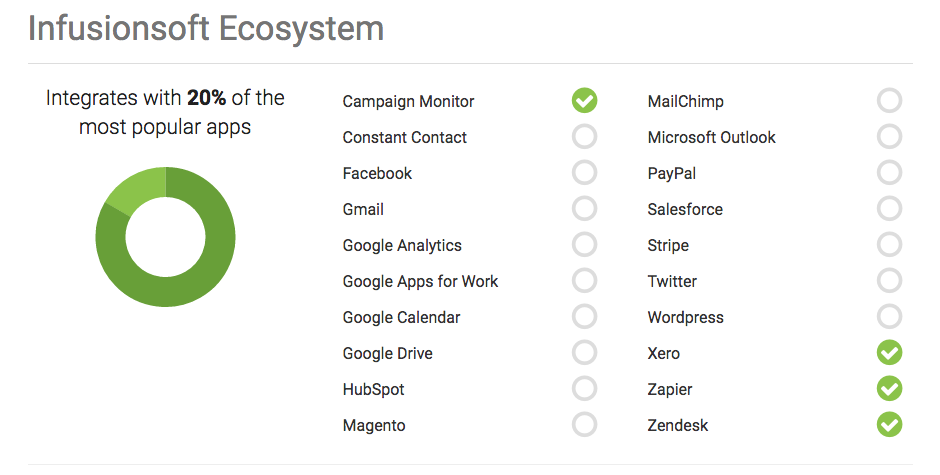 Infusionsoft also integrates with a handful of business intelligence, e-Commerce, and HR and employee management apps, and has recently added native integrations with more software for finance and accounting including Xero and Quickbooks, as per user request.

What do the users think about Infusionsoft integrations?

Because many companies rely heavily on Infusionsoft for conducting much of their daily business, some users note that a few more integrations with point of sale or payment processing apps would be beneficial.

Chelsea from Solamar Agency says: "I wish they were more integrated with payment gateways/processors. They do have an approved list of people they integrate with, but there's a few that aren't on that list so it makes it hard to help clients with the integration."

Jeremie from MeInOrder.com shares the same sentiment, saying "Infusionsoft has become such a large part of our business that we wished that it would integrate with more software such as our mobile POS system."

Because Infusionsoft is meant for small businesses and already offers quite a robust set of features, some users have experienced issues integrating Infusionsoft with other software, particularly Gmail.

As reviewer Christopher Longmore, CEO at Marine Renewable Energy notes, "the system (unlike Insightly for instance) does not capture incoming client emails, and capturing outgoing emails from GMail and Outlook is a minor nightmare."

Another user verifies the problem, saying "Gmail integration was an issue. If you live in Gmail I would look elsewhere."

There have also been noted issues with CRM integration, likely because of the CRM features offered by Infusionsoft itself. One business manager says, "sales assured me they integrated with my CRM but once I signed up I discovered that none existed."

It's not all bad news, and many are happy with the Infusionsoft integrations. As one user says, "InfusionSoft has also done a good job of working with third parties, making integration with applications, webinars, landing pages, and other eCommerce apps easy."

Infusionsoft also offers great integration with many of its partnering sites and databases. Another GetApp reviewer notes, "I was able to integrate Infusionsoft into my existing membership site database."

How well do Infusionsoft integrations compare to other apps?

Despite users complaining about a lack of some key integrations, when compared to other sales, marketing, and CRM software, Infusionsoft integrates with as many apps as most of its competitors.

Comparable CRM and sales automation app Insightly has 35 integrations, although notably, it does have native integrations with 55 percent of the most popular apps on GetApp, including those big names mentioned above. When it comes to marketing automation, competitor HubSpot offers integration with 86 other applications listed on GetApp, many of these including popular products like Salesforce, SugarCRM, WordPress, and ZohoCRM. 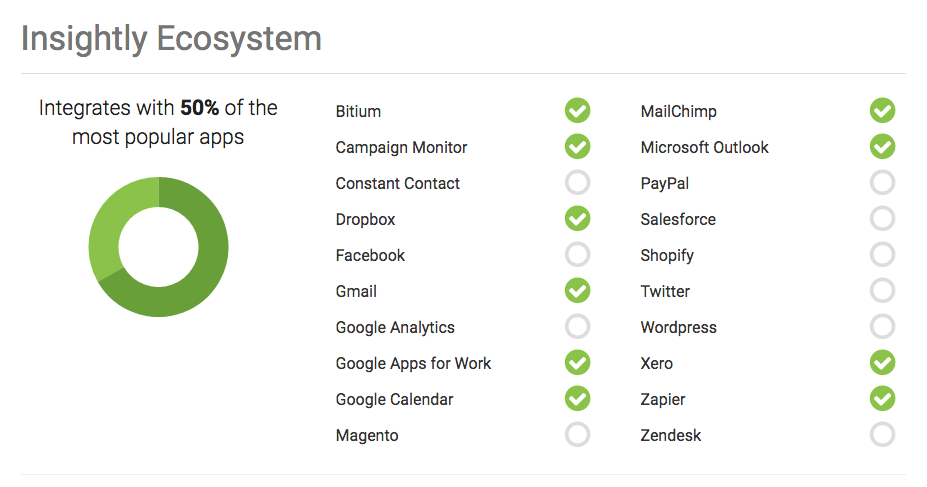 Infusionsoft is a fully featured sales and marketing automation software with CRM and eCommerce capabilities, making it a good solution for small companies looking to carry out much of their business on one platform. Integrating with CRM, marketing and customer service and support software, Infusionsoft is popular among those in the marketing and IT industry and tailor-made for small business owners.

While users are missing some key native integrations, mostly notably POS systems and payment solutions, integration with apps like Zapier help extend the connectivity of Infusionsoft with other applications, making it a fully-featured software choice for small business owners.

Which software do you wish Infusionsoft integrated with? Write a review of Infusionsoft on GetApp and let us know.