How to launch a successful SaaS product: Lessons from Beyoncé and Kanye

Beyonce and Kanye recently releases albums whose successes (and failures) can teach you lessons on how to launch a SaaS product.

Kanye West’s new album The Life of Pablo was recently hailed by TechCrunch as the first SaaS album ever produced. If that’s true, it’s not a very good example of how to release a SaaS product. If albums are like SaaS applications, a much better example of how to launch a product comes from the Queen B herself, Beyoncé, with her new record Lemonade showcasing what can happen when you release an innovative product.

The Life of Pablo was released ‘unfinished’ and updated on the fly on the music streaming service Tidal, its launch mimicking that of a SaaS product being quickly pushed to market in its 1.0 version. Disjointed, chaotic, and inconsistent, the hype surrounding the music was mired by its flawed release.

Lemonade, on the other hand, was released as a 12-track visual masterpiece debuting on HBO, demonstrating how a high quality, innovative, and accessible product can go a lot further than releasing something just to get it to market.

So, what can you learn from Beyoncé (and avoid from Kanye) about how to launch a SaaS product that’s groundbreaking?

Having a stellar product can do more than any promotional effort or marketing tactic combined.

Kanye created a frenzy around The Life of Pablo, with multiple name changes, Twitter rants, and proclamations stating that the album would only ever be available on Tidal. When all was said and done, he delivered an unfinished album that required multiple ‘fixes’ after its release in the form of ‘push updates’ via Tidal.

With Lemonade, Beyoncé released her surprise (no one knew exactly what was coming or when) concept album complete with an hour-long video to accompany the tracks. Just days after its release, it was already being hailed as one of her best albums to date, and all with little to no pre-promotion.

Comparable in the software world? Slack. As one of the darlings of cloud business software, Slack has seen unprecedented growth, not because of an aggressive promotional effort, but because of an exceptional product. Unlike many SaaS apps that launch first and fix later, the team collaboration app chose to focus its efforts on only its core features of search, synchronization, and file sharing upon release, executing them to perfection. 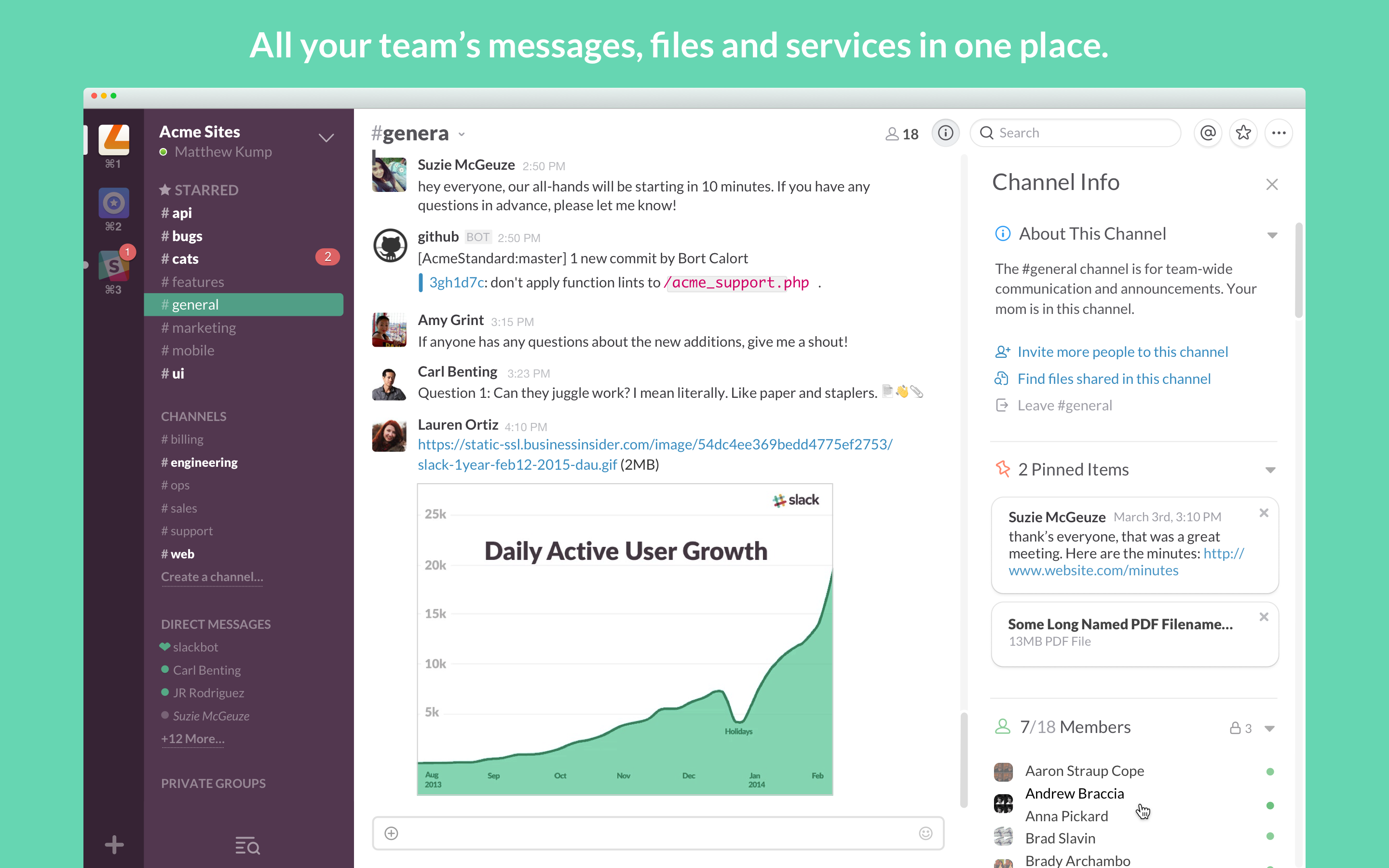 According to an interview in First Round with Stewart Buttefield, co-founder of Slack, “we had a lot of conversations about choosing the three things we’d try to be extremely, surprisingly good at… and ultimately we developed Slack around really valuing those three things. It can sound simple, but narrowing the field can make big challenges and big gains for your company feel manageable.”

Slack’s adoption grew exponentially, and much like Lemonade, did so with virtually no marketing effort. Mainstream media outlets started writing about Slack because it was a good product, and with traditional media uptake, the adoption rate picked up to help it become not only one of the leading collaboration apps, but one of the leading SaaS solutions on the market.

While there’s something to be said about time to market, there’s a difference between delivering a product that is functional, and one that’ll reflect poorly on future uptake.

While Kanye’s move to update The Life of Pablo after it had already been released is novel, there’s debate over whether or not the idea was intentional or not. Was it a fix to an album that was too trigger-happy upon release? Was the ‘update’ a way to get more buzz? Was he taking full advantage of having the album available only on the streaming service that he has a financial stake in? While Kanye made a big deal about the ‘update’, at the end of the day, the ‘fixes’ were limited to a few minor changes and were more of a patch than an upgrade (although rumor has it, there’s more to come).

Fixing Wolves 2day... Worked on it for 3 weeks. Life Of Pablo is a living breathing changing creative expression. #contemporaryart

Beyoncé, on the other hand, released what can be considered the second ever visual album (the first is her 2013 self-titled release) with Lemonade, although this time around, the video and music follow a cohesive story arc taking viewers on a journey through her (presumably) personal experience of marriage and infidelity.

While the concept album has been put on the backburner in favor of singles in the past decades, the visual album is a pioneering triumph for the music industry.

Similarly, where there is room for software innovation, a SaaS company will find success. Slack found a niche in the market for communication apps, creating an office communication solution to combat the problem of email being sent back and forth between employees and interfering with productivity.

But it’s not the only innovator.

Cloud accounting app Xero entered the game in 2006, when cloud accounting wasn’t even a thing. Founder Rod Drury was looking for a way to make accounting easier for small businesses, while accountants were desperate for a change in the stagnant world of accounting software.

According to Xero, “Drury realized that it was very difficult to get useful information out of your accounting software. There was also no true way to collaborate with your financial advisor. That’s how the idea of Xero was born.”

The cloud accounting solution was able to provide an innovative and eye-catching accounting app that simplified the accounting process for both accountants and small business owners. Features such as bank feeds and account reconciliation, accounts payable functions, payroll, and invoicing were, for the first time, being hosted in the cloud. Being the first to the game, Xero has been able to continuously innovate its look and feel in order to remain relevant in an increasingly competitive cloud accounting app market. 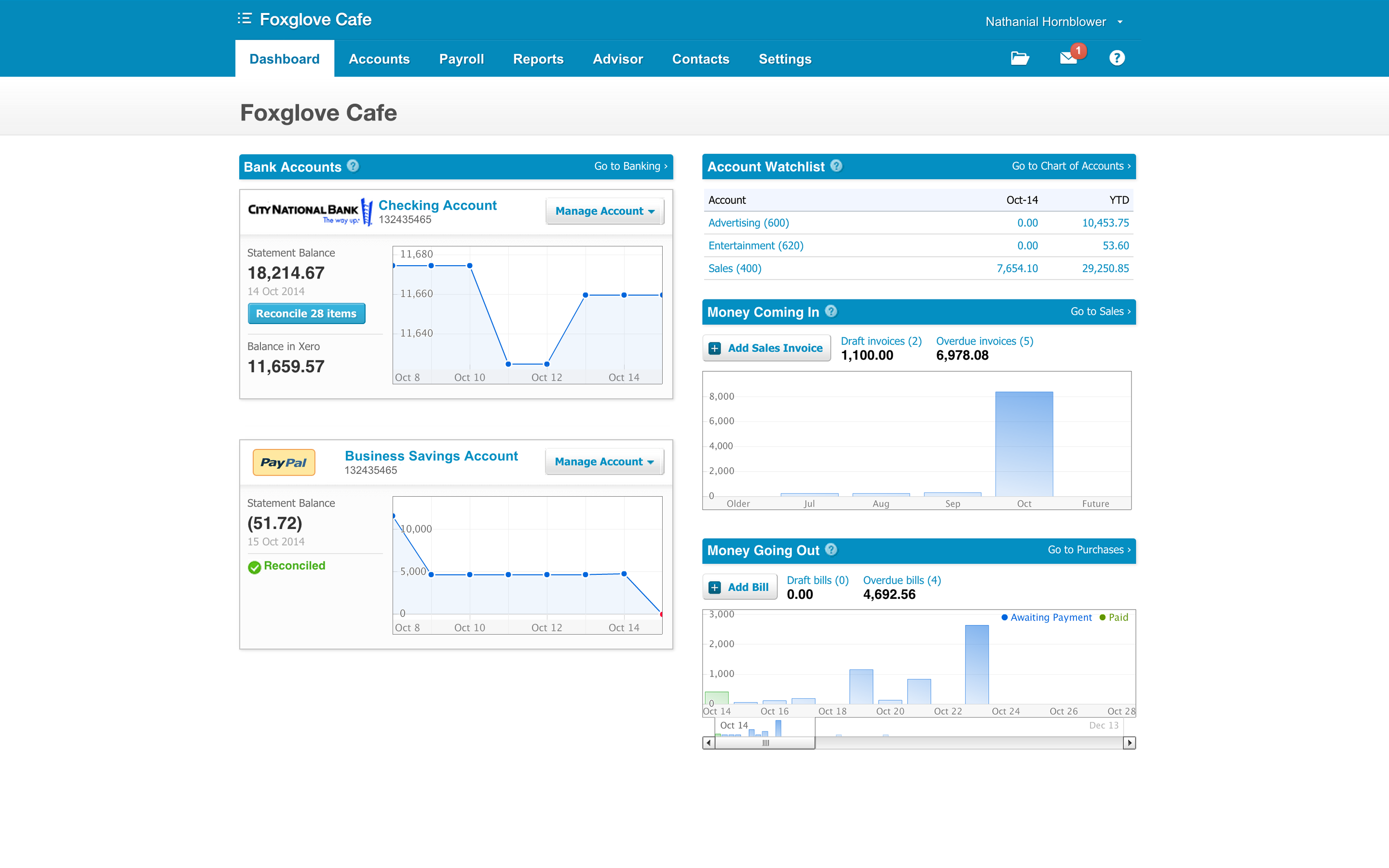 Over the years, the company has been able to cater to users’ needs by adding important software integrations with other solutions like PayPal and Dropbox to help streamline and simplify the accounting process. Notably, Xero made it to the top of Forbes’ Most Innovative Growth Company list in 2015 for its continued innovation in cloud accounting.

Never underestimate the importance of pricing. If you’re going to deliver a product, you’ll want to deliver it so that your users/fans/loyal followers are going to be able to access it. The drama that was The Life of Pablo album release started with an exclusive, Tidal-only release, with Kanye proclaiming on Twitter that people could only ever get his album on Tidal. Many flagged the announcement as a cheap trick to get more subscribers to the fledgling music streaming site– and they were right.

Angering fans who signed up to the $10 to $20 a month streaming service just to hear the album, he eventually caved to the opposing larger, angrier group of fans that didn’t sign up to Tidal, and made his album available on streaming services Apple Music and Spotify.

Interestingly enough, Beyoncé too has a stake in Tidal, but after an HBO premiere and a 24-hour exclusive on Tidal, she proceeded to release her album on iTunes and Amazon for $17.99, giving widespread access to Lemonade so that more fans could access it without making the commitment to Tidal.

While the cost of Lemonade is higher upfront, the difference is that users don’t want to commit to something without knowing what they’re getting themselves into. This is especially true if you’re asking them to make a big change, like switching from one subscription service (that they’ve likely spent a painstaking amount of time tailoring to their preferences) to another.

As one Openview Labs article points out, unless you’re giving users something truly innovative, you risk them choosing the alternative– nothing. They’re either happy with what they have, or happy using nothing at all. This is where the importance of pricing comes into play. If you don’t set the right price, you risk alienating users, or even worse, putting your business at financial risk.

Many SaaS applications generally run on a monthly or yearly subscription model based on metrics like number of users, campaigns, or clicks.

Email marketing app MailChimp is a good example of a tiered subscription system, although it didn’t get it right the first time. Launched in 2001, it took eight years before MailChimp realized that it could vastly grow its user base by adding a freemium option that would give access to more users who could potentially scale up with the service. One year after it announced its freemium option, its user base grew from 85,000 to 450,000 and its number of paying customers increased 150 percent. 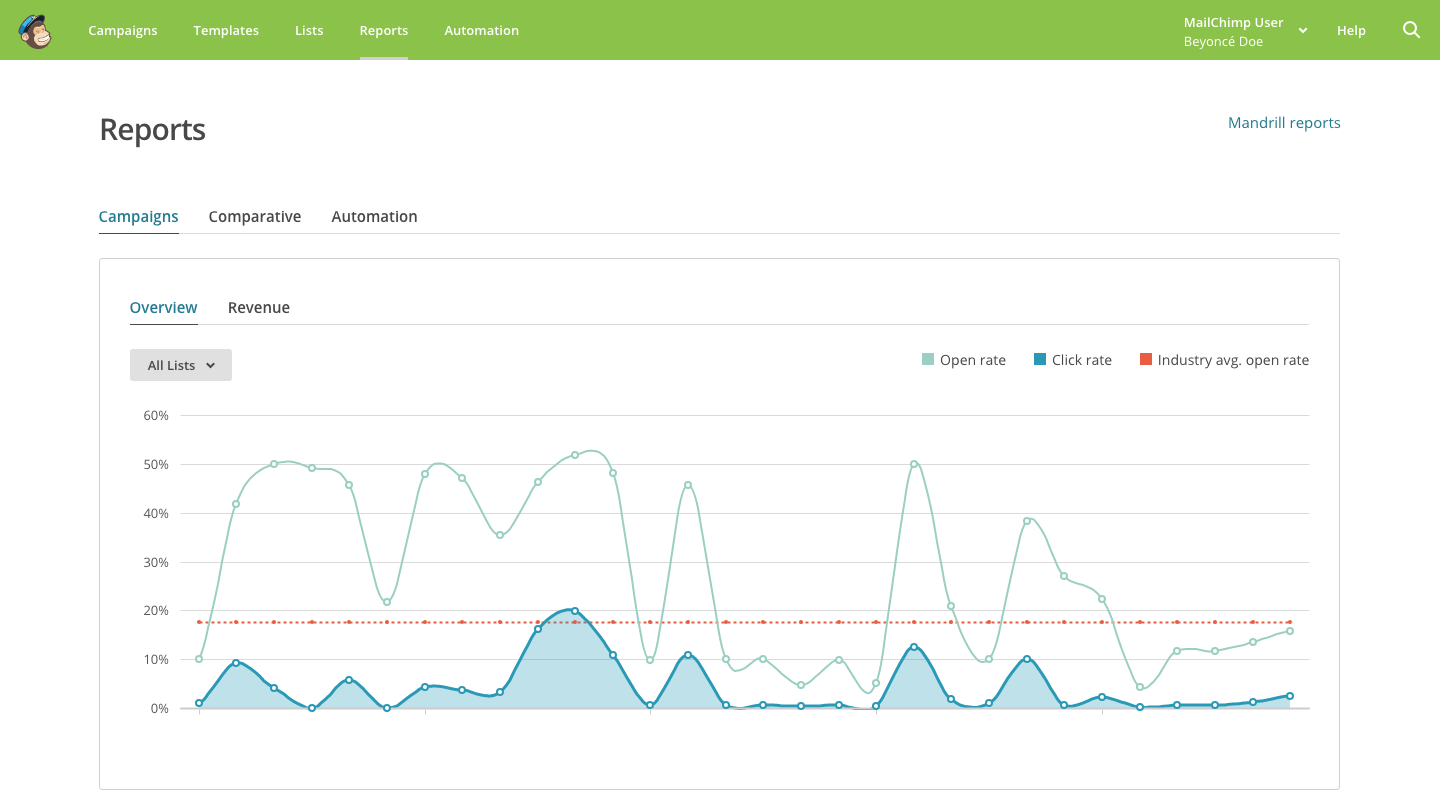 Notably, it did not have to sacrifice its attribution of larger users with larger lists when it went freemium, seeing that both smaller businesses scaling up, and larger businesses looking to make use of new and improving features, could mutually benefit from the service.

According to Mailchimp co-founder Ben Chestnut in a blog post from 2010, “something that might surprise people is that going freemium didn’t totally skew our user base to teeny-tiny accounts full of ‘extremely small businesses’ with extremely small lists. We’ve actually seen our number of large customers grow. A lot.”

Since then, it’s become one of the most successful email marketing apps on the market. 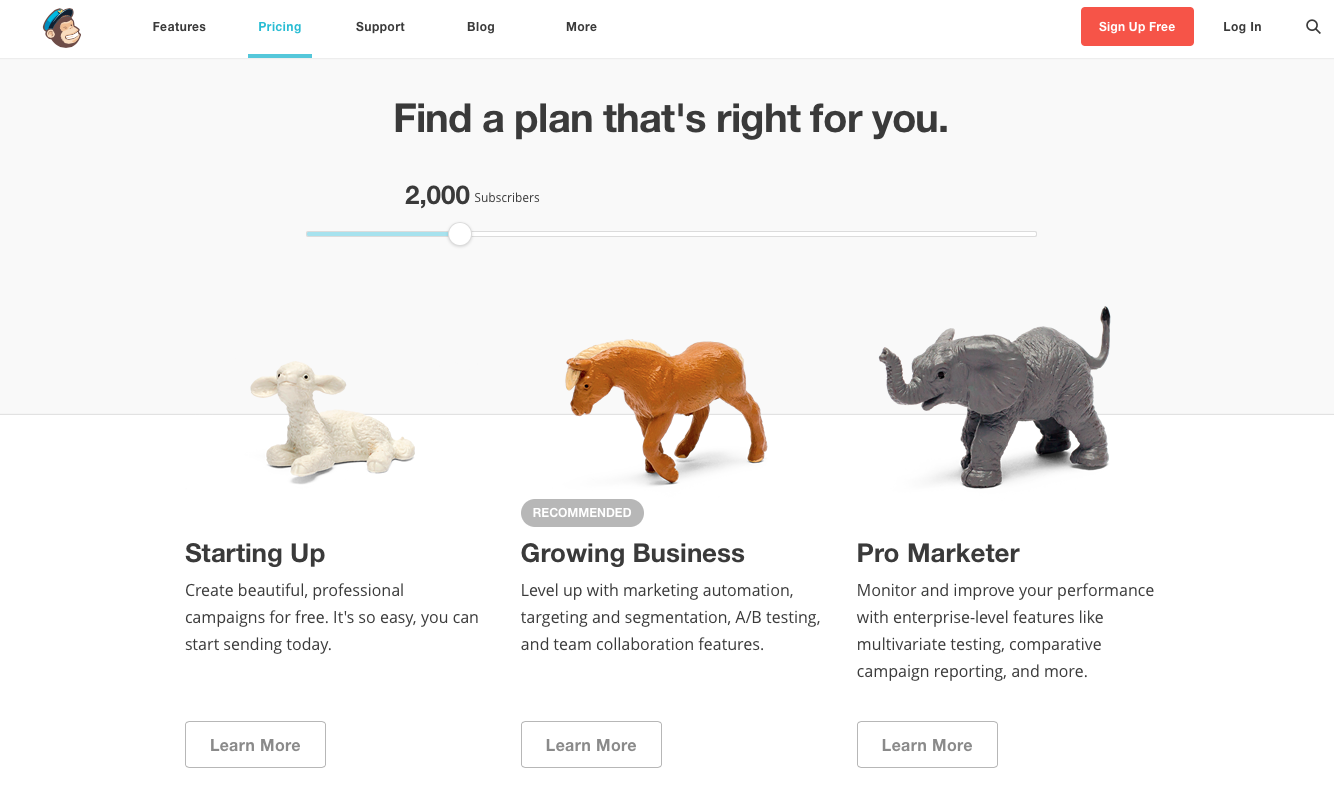 While the freemium model is good for initial user adoption, however, there’s a point where it becomes necessary to establish a pricing strategy that will benefit your company and still be accessible to users. Setting the right price from the beginning will ensure that you get the right user uptake.

A typical complaint of the subscription model is the sometimes difficult terms and conditions associated with cancelling or making changes to subscriptions, another consideration for users when signing up to a service.

Once again, Slack has showed innovation in its pricing structure, offering what’s being called adaptive pricing so that when a user is deactivated, Slack will automatically detect the change in the number of users for that account and reduce the amount that’s being charged.

Both Beyoncé and Kanye are powerhouse superstars in the music industry, but no matter how big your backing, delivering a successful product still requires proper planning and execution. Kanye’s album wasn’t a total flop, but it certainly failed to deliver on expectations created by the megalomanic artist himself. Beyoncé, on the other hand, quietly released Lemonade without warning, and let the record speak for itself.

When it comes to delivering a successful SaaS product, you may not have the star power of Kanye or Beyoncé (or Google or Salesforce, comparatively, in the SaaS world), but if you come up with an innovative product, execute it well, and make it accessible to your user base, you have a much higher chance of making something that’ll let you taste sweet success.

Explore some of the brightest stars in the SaaS world in collaboration, accounting, and email marketing on GetApp.