Why consumer messaging apps for business are the next big thing

Consumer messaging apps for business will soon be one of the best ways to reach customers. Here's why you should get on onboard.

Consumer messaging apps are the next big thing when it comes to connecting with customers. At least, that’s what Gartner and other big players in the industry are predicting. And it makes sense. People are always on their mobile phones. Check. They’re constantly chatting on Facebook or other mobile messengers. Check. They want a more immediate way to connect with companies online. Check.

Apps like WeChat and LINE have already proven successful for businesses in countries like China and Japan, where their monthly active user counts exceed 600 million and 200 million respectively. With these successful use cases paving the way, it’s only a matter of time before businesses all over the globe start experimenting with consumer messaging apps for everything from CRM and advertising, to e-commerce and content distribution.

Here’s why you should think about getting on board with the mobile messaging masses, and how your business can start using it.

Why consumer messaging apps for business?

There’s plenty of reasons to start using messaging apps for your business. Here are the top 5.

1) They have huge numbers

Messaging apps contribute to a large portion of the mobile app market. As an internet trend report from KPCB shows, messaging apps encompass 6 of the top 10 most used apps globally, with the highest number of sessions. 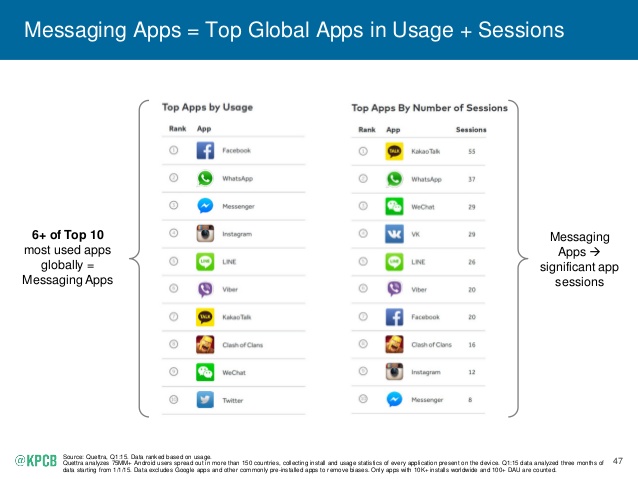 Important here is the number of active and engaged users.

A quick overview shows how many monthly active users some of the most popular messaging apps have: 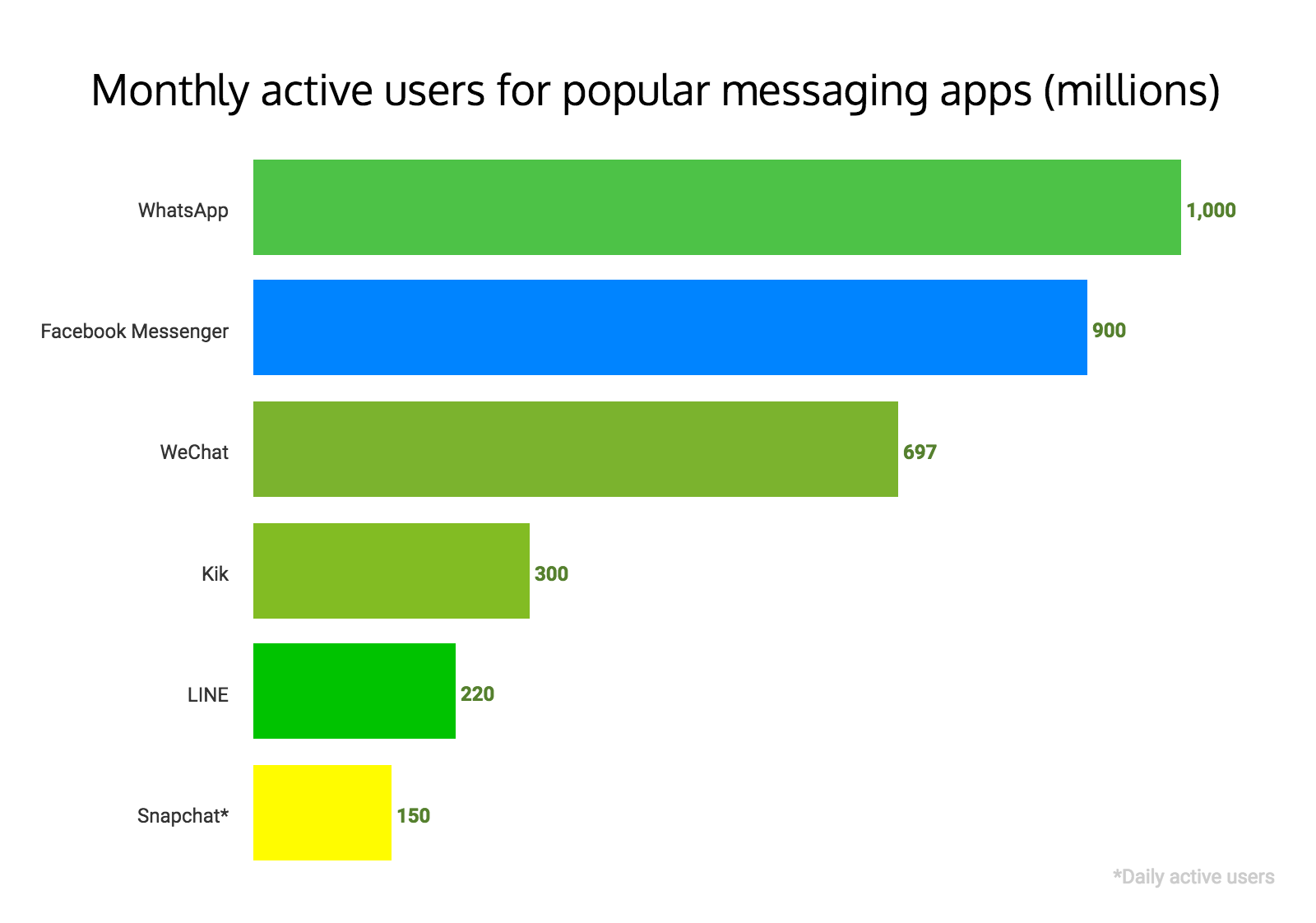 Add those numbers up, and you’re well into the billions when it comes to monthly active users.

When you compare those numbers to people using social media– a platform that marketers are currently targeting much more heavily than mobile messaging – mobile messengers outrank social media when it comes to engaged monthly users. According to a report from Business Insider, the four most popular messaging apps have more monthly active users than the four major social networks, making it a highly valuable target for marketers.

2) They're more private than social media

Privacy is important to consumers, especially when it comes to customer service delivery. Sure, 23 percent of people complain on social media or public forums out of vengeance, but those looking to solve a problem are likelier to do so in private if the option is available. Sprint introduced Messenger as part of its customer service strategy, and saw a 31 percent increase in private messaging with a 23 percent decrease in comments on its public page.

Aside from privacy options for users, it can also be beneficial for your brand. People airing their grievances on your public social media profile isn’t exactly good PR for your brand. Giving them the chance to do it in a private environment will, as Sprint demonstrated, decrease their dependence on public forums for reaching out.

It’s not just about having a chat. Because of their nature, you’ve got options when it comes to the types of messages that you want to send via mobile messengers.

One to one is the most obvious choice, which is how consumers generally use them, but there’s also the option of sending out mass messages, as well as timeline-like features in messengers like LINE that let you post news, updates, promotions, or content related to your brand.

4) You can use chat bots

All the rage these days, messengers are the ideal platform for making use of the new phenomenon of chat bots. For those not already in the know, chat bots are exactly what they sound like: robots (computer programs) responding to customer queries using machine learning and artificial intelligence. They can range from providing questions for you to answer in a “choose your own adventure” type scenario, to having basic conversations. Think Siri and Cortana meet automated responses.

Messaging app Kik already has a full blown bot shop where you can find bots for H&M or the Weather Channel. 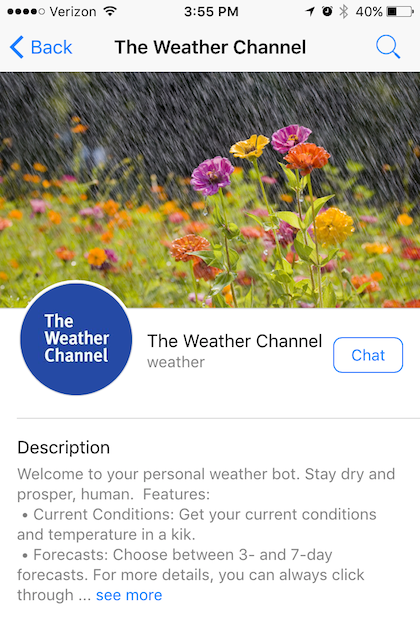 The H&M bot, for example, will give you outfit suggestions based around a piece of clothing that you indicate you like. LINE also offers a bot API to let businesses create bots for their customers.

As chat bots become smarter, it’ll be easier for you to leave your customers in the hands of AI.

5) They can integrate with your other software

Okay, maybe not all messaging apps have this functionality yet, but some are starting to enable features that let businesses integrate with other software. This will become especially important for managing customers, pushing out marketing materials, and adding payment functions via eCommerce solutions. Below is a list of some of the software connections already available in three popular messaging apps. 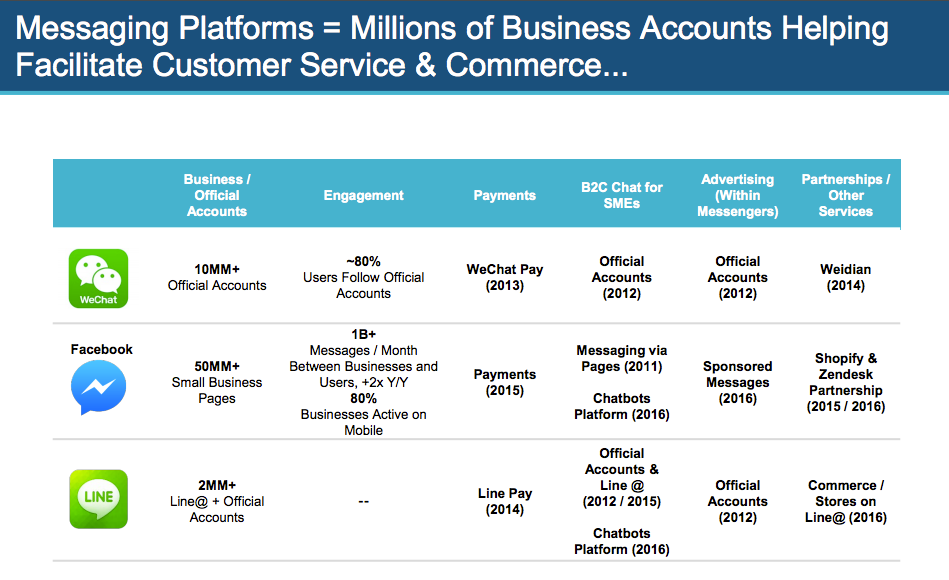 LINE offers a solution called Line Business Connect, which lets businesses connect other apps to its services through an API, as well as an SME Partnerships Program to help small and mid-sized businesses use LINE to promote their businesses.

Use cases for mobile messengers

Now that the reasons for using it are clear, how can it actually be done in practice? Below are a few examples.

Customer support has some of the biggest potential for using messenger apps. As the Sprint with Messenger example mentioned earlier demonstrates, it can be very effective, both for customers and for brand management. For customers, it provides a more immediate way to get a response, an ever increasingly important factor for a demographic that favors immediacy. As this infographic from HelpScout notes, one of the top two reasons for losing customers is a company not being able to respond quickly enough.

For brands, again, it’s about managing brand image by taking customer complaints or concerns from the public to the private.

For example, customer service tool Aspect is already adding options that support the use of Messenger for customer support to integrate with and keep track of all support requests in one place.

Capturing a captive audience is difficult in the distraction-laden world of today’s tech, but messaging apps offer a good option because people already have their eyes glued to them. Typically, marketing and advertising campaigns on messengers can come in the form of mass messages, interactive content, and video, among others.

Snapchat is a popular platform where people can receive direct messages or see Stories from certain brands promoting products or campaigns. The Danish branch of the World Wildlife Fund ran a campaign sending 10-second snaps of endangered species to its followers with the hashtag #LastSelfie in order to raise awareness as part of a fundraising campaign. It was able to raise its fundraising goal within just three days of the campaign, showcasing the effectiveness of this medium for marketing on a mass scale but still directed at individual users.

KIK, on the other hand, takes advantage of the platform itself by offering advertising capabilities so that users can watch videos in exchange for points that’ll buy them stickers or other add-ons for the app.

WhatsApp is another example that, while limiting its openness for business use, saw Toyota use the platform as part of a marketing campaign in Spain. Toyota encouraged customers to send cheesy pick-up lines to its WhatsApp account as part of a campaign to promote their new car, the Toyota Aygo, with the winner receiving their own brand new Aygo on Valentine’s Day.

Monetizing messengers is still in a largely experimental phase, but there are some apps making headway in the process.

WeChat, China’s most popular messaging app, already offers a way for businesses to set a up stores within the messaging application. Businesses can upload items and manage the stock of their WeChat stores through the app, a significant functional ability in the realm of messaging apps.

A WeChat pharmacy in China 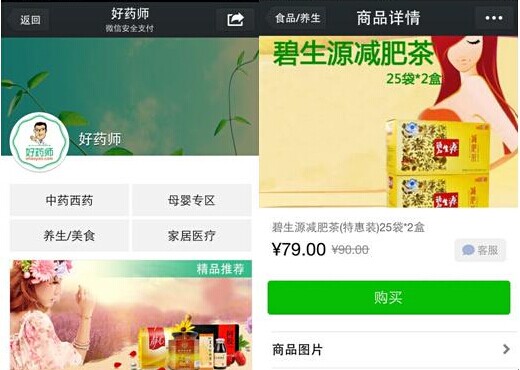 LINE is taking a similar although slightly different approach, offering users the ability to pay for items online through the app using its own LINE Pay services, as well as being able to purchase things from its own app store, like the hugely popular LINE stickers. Similarly, companies can also send offers or coupons directly through LINE to its users. As noted in Gartner’s report, one Japanese retailer saw a 30 to 50 percent increase in revenue from products promoted directly to users through LINE.

Facebook has also started experimenting with e-commerce on its Messenger app with Everlane and Zulily, two retailers partnering with Facebook in the endeavor. Demonstrations last year showed how users could make a purchase straight through Messenger with the help of a customer service rep. 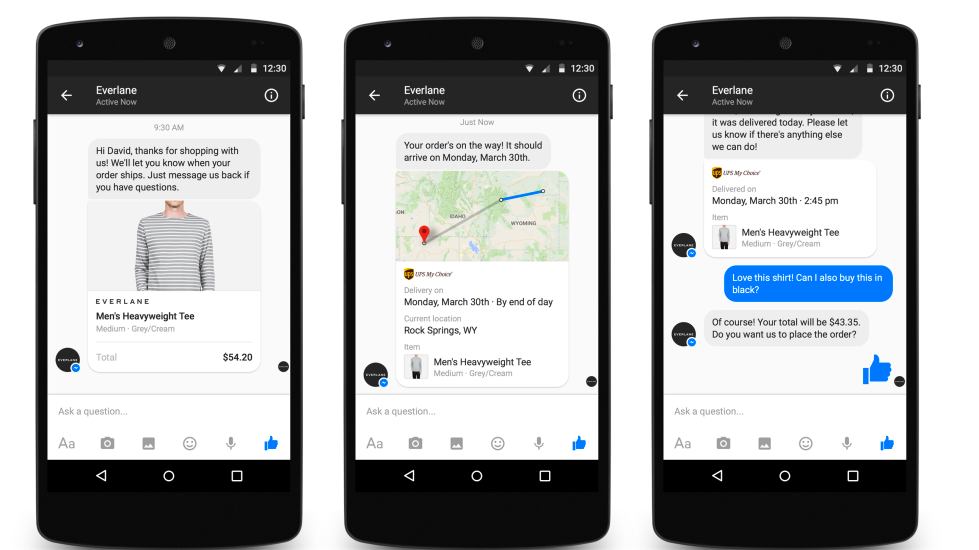 As these features continue to get fleshed out, there will be huge opportunities for e-commerce in the world of mobile messaging.

Some mobile messengers can function much like a social network, giving you the option to post things on a timeline similar to Facebook or Twitter. LINE is one of those messengers, which has a timeline feature that’ll let companies (and users) open channels and post things like links and images. iHeartRadio is a good example of LINE’s success for businesses– six months after its radio personalities set up accounts on the app, they had more followers on their LINE channel than on iHeartRadio’s Facebook, Instagram, and Twitter accounts combined.

Snapchat is another innovator in the messaging app space for delivering content to consumers. Publications like the Daily Mail, Cosmopolitan, and Vice magazine all have channels on Snapchat featuring popular stories from their websites, giving immediate access within the app instead of sending users to another location to read the story.

This is great for brand exposure, and also adds opportunities for click-through and advertising.

Proceed... but with caution

Mobile messaging for business is definitely something to look out for. It will become imperative to connect with customers by meeting them in a place where they’re already spending much of their time. Before you starting throwing all of your money into mobile messenger strategies though, keep a few things in mind: 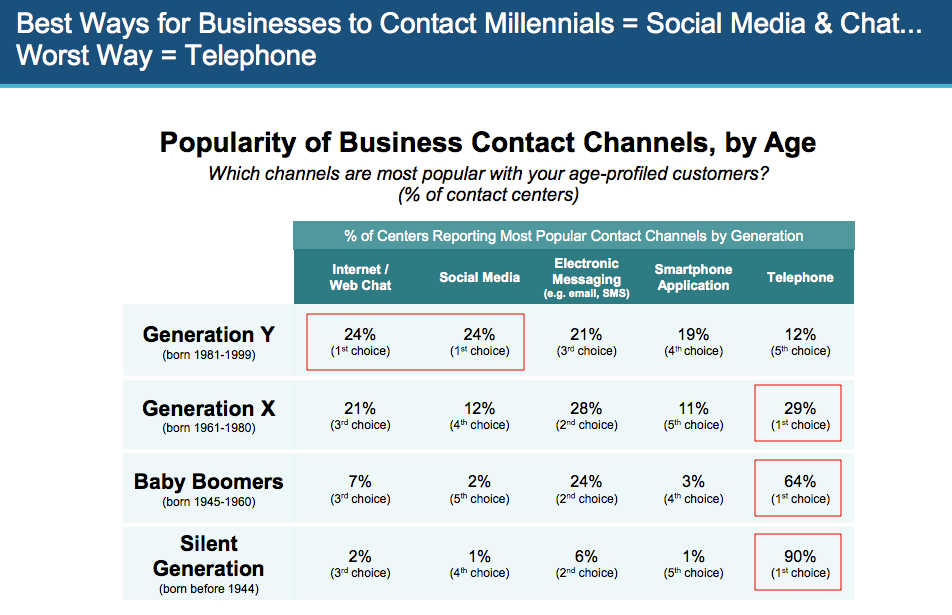 As long as you proceed with caution, the future of consumer messaging for business looks promising. As its use starts to expand, so too will those necessary features to optimize it for businesses.

5 Customer Journey Stages and How to Track Them

How to Start A Virtual Call Center

What Is the Customer Journey?

What is a Virtual Call Center? How Your Business Can Benefit From Going Virtual