Software Pricing Models Are Confusing; We Clear Them Up

Analyzing pricing models can help you find the software that best fits your business needs and budget.

Software-as-a-service (SaaS) products might be based in the cloud, but that doesn’t mean their pricing should be foggy.

Software pricing models come in a bewildering array of structures with added fees that can be intimidating. This might be why a recent GetApp survey revealed that spending too much money is the most common concern that businesses face when selecting software, beating out features, security, and integrations.

We’ll help you focus less on pricing and more on finding the right tool.

SaaS software is typically licensed on a subscription basis, either monthly or annually. Some vendors offer a perpetual license for the life of the product, but this is becoming increasingly rare and is typically reserved for on-premises, self-managed software implementations.

Vendors generally price per user, although some IT security solutions might charge per endpoint, server, or web application. Additionally, SaaS software packages are often offered in multiple versions ranging from simple and relatively affordable to complex and more expensive.

For example, ServiceNow Express is a pared-down version of ServiceNow and is $50 per user. To upgrade to the full-enterprise edition of ServiceNow, there is a significant annual fee and the price per agent doubles.

Named vs. concurrent use licenses

Volume-based and tiered pricing structures—whereby companies pay less per license as their subscriber count grows—are widely available. However, not all licenses are created equally. Software buyers must be aware of the distinction between named and concurrent users.

WHAT IS A NAMED USER PRICING MODEL?  A named user pricing model requires that each user have a specific login and allows all users to be logged in simultaneously.

A company has a 30 member IT department that is occasionally deployed en masse to resolve network outages. Because all agents can be logged in to the system simultaneously, the company selects a named user model.

WHAT IS A CONCURRENT USER PRICING MODEL?  A concurrent user pricing model allows businesses to buy a fixed number of licenses that can be used by an unlimited number of users, though only the fixed number can be logged-in simultaneously.

A business has a 30 member IT help desk with 3 teams that work in various set shifts. As there will not be a need for all 30 agents to be logged in at the exact same time, the business opts for 15 licenses under a concurrent user pricing model.

Typically, a named model comes at a lower per-user price compared to a concurrent model. For optimum cost savings, select the concurrent model only if your business requires a few users to simultaneously use the tool.

Comparing bands against per-user pricing is difficult because the price varies widely depending on how many users you have in the band. For example, the 51-100 annual user band is $15,750, but monthly pricing (calculated yearly) ranges from 51 users for $10,080, to 100 users for $18,900. As you can see, the annual user band falls somewhere in between. However, this changes once you reach the 201-300 user band in which annual pricing begins to move well ahead of monthly pricing. The following chart depicts annual versus monthly pricing using the median of each annual band (e.g., 38 is the median of the 26-50 band) for direct comparison with monthly pricing at the same number of users.

For 20 to 150 users, the monthly price is slightly lower than the same number of users at the annual price, making it attractive for quickly growing small businesses. However, this changes between the 150 and 250 user mark at which point monthly pricing jumps significantly, costing thousands more per month than annual pricing.

For this reason, small businesses should stay keenly aware of the point at which annual pricing begins to overtake monthly pricing and develop a strategy to make the switch when the time is right.

Software buyers should also consider that pricing increases sharply from one annual band to the next. For instance, if you have a small business with 25 users on a monthly plan and want to add a 26th user, you’ll pay an additional $180 per year. However, if you are on an annual plan and change from the 16-25 band to the 26-50 band, your bill increases by an astounding $3,750 per year. 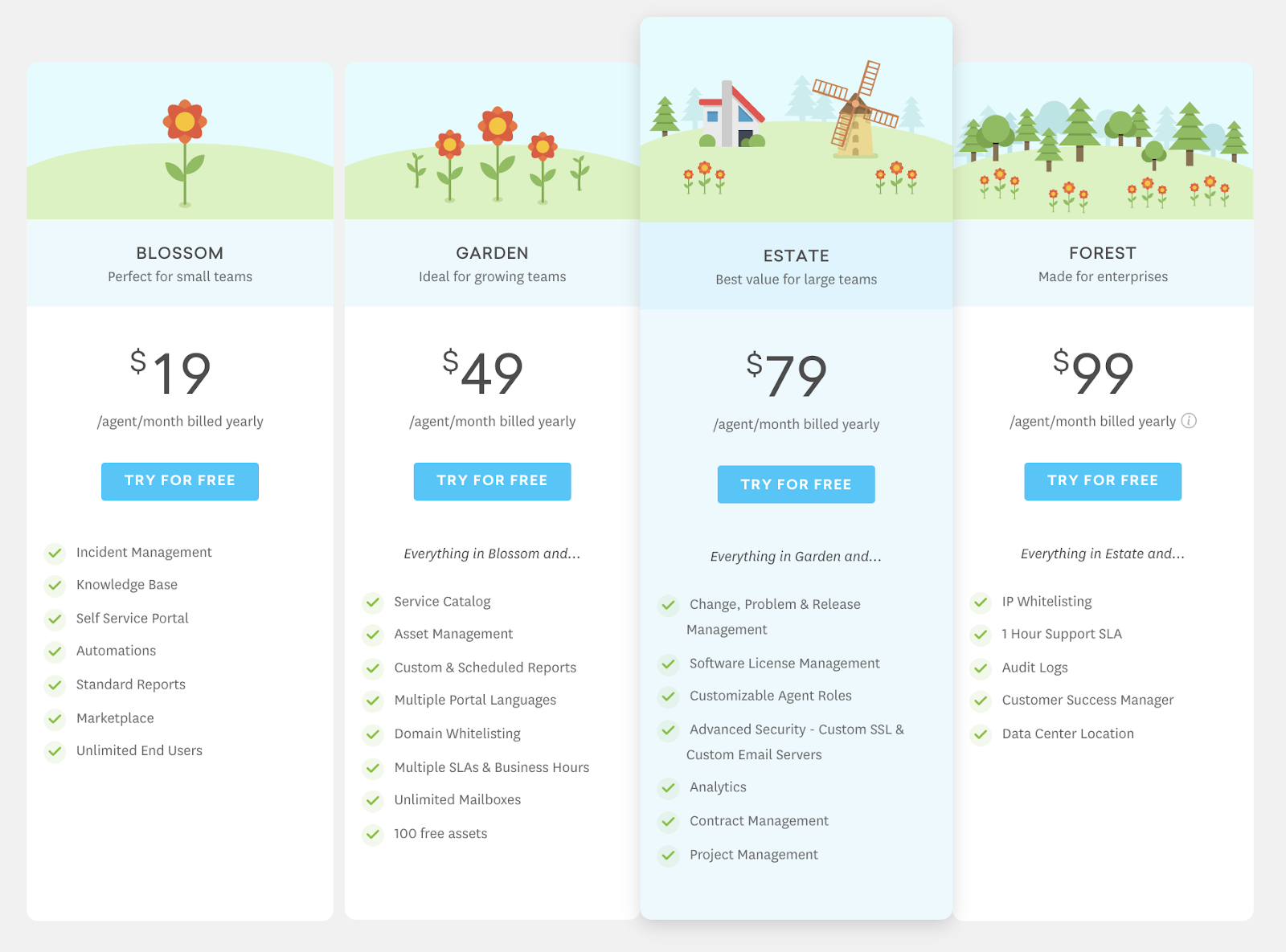 Notice that the Estate plan is highlighted; I didn’t do it—that’s just how it appears on the page. SaaS vendors that offer package-based pricing typically present 3-6 options, with one plan highlighted. This might be indicated as “best value” or “most popular,” but it’s usually the plan that’s most profitable to the vendor.

Though the package-based pricing structure might (at first) appear less complicated than a tiered versus monthly dilemma, the Freshservice model above also charges on a tiered basis per asset managed by the software. An additional $40 per month is charged for up to 250 assets, $75 per month for up to 500 assets, and so on. That is small print that can ratchet up the cost of one pricing model versus another.

This pay-as-you-go model can be beneficial to companies with demand that ebbs and flows throughout the year or according to each project. Some companies have begun offering typical user-based pricing models with an option for consumption-based overage. For example, a contract might be made for a minimum of 1,000 users with the option to add and subtract up to 500 users according to fluctuating demand.

4 things to consider before finalizing your software purchase

The ease of scaling cloud-based software has been a primary driver of SaaS adoption. Adding new licenses or bumping up to the next package as your business expands is a huge benefit, but sometimes, that scalability only goes in one direction. Determine whether you’ll be allowed to switch to a smaller package or drop down to fewer licenses—and if you’ll incur any fees if so.

Most SaaS products include some level of support, but the amount of support you need might not be included in the “all in” price. Additionally, some organizations require a sandbox testing environment to ensure that their systems and data will work harmoniously with the software before going live. This might or might not be included as well.

It’s not uncommon to migrate from one service to another. That’s why you should be sure to have an exit plan prior to signing a contract and accepting the terms and conditions. Be aware that many vendors charge data extraction fees and that some metadata might not be transferable at all.

No matter the size of your business, it never hurts to ask about a discount or haggle over terms. SaaS vendors often price in an extra 10-20% as latitude for sales negotiations. Also consider negotiating other details such as data extraction fees or support prior to signing a contract.

Getting ahead of software pricing strategies

Remember that software pricing models are not designed to be user-friendly. In fact, just try searching for another article like this one and you’ll likely encounter page after page of articles suggesting software pricing strategies for vendors instead of buyers—although, such articles might offer just as much insight for buyers.

The SaaS software market is dynamic by nature. To meet the needs of increasingly agile digital businesses, existing pricing models are evolving and new options are emerging. Some vendors, such as Cherwell and ServiceNow, skip all of the complications by only offering quote-based pricing based on their perception of a company’s needs.

Having a clear understanding of various software pricing models enables you to concentrate first and foremost on finding the tools that best fit your company’s needs—rather than its budget.

The software vendors mentioned in this article have been selected solely to illustrate various software pricing models. These pricing strategies are not unique to these companies and are offered by numerous other software vendors.

The GetApp survey mentioned in this document was conducted in 2018 among 1,846 respondents who were asked about their biggest concerns when selecting business software.

This document, while intended to inform our clients about software pricing models in the global marketplace, is in no way intended to provide legal advice or to endorse a specific course of action.