Use these powerful iOS business intelligence apps to make sense of your data and gain deeper insights.

If you're reading this on a mobile device at work, you're probably using an iPhone. At least according to Tim Cook, who said that the iPhone is used by a mind-boggling 97 percent of Fortune 500 companies. Granted, you probably work at a small or midsize business, but it's still likely that your company uses iOS devices, and if not, it inevitably will when it becomes a corporate behemoth.

In case you're wondering: Gartner defines business intelligence as "an umbrella term that includes the applications, infrastructure and tools, and best practices that enable access to and analysis of information to improve and optimize decisions and performance." What that boils down to is that business intelligence apps essentially take data (customer info, sales figures, shipping times) and present it in a digestible form, usually graphs and charts, so that you can gain insight and make better decisions.

Zoho Analytics is a powerful analytics tool that features the standard tools that you'd expect to see in a business intelligence app: all sorts of reporting options (e.g., charts and pivot tables), user-friendly visual analysis, and dashboard creation. It also can export data in formats such as CSV, TSV, and XLS.

Zoho Analytics for iOS doesn't boast all the options that its parent SaaS app does, but instead focuses on different ways to sort, search, and view the data. You can apply filters to the data and visualize the data in a variety of charts (pie, donut, line, etc.). Another perk of the app is that you can share reports and add permissions to them at a granular level. For example, you can control whether people can modify, export, create, and view reports.

Tableau is for companies that are midsized and on their way to becoming a large company or enterprise. What makes Tableau interesting is that it doesn't just provide reporting and analytics, it also works as a stylish data visualization tool. News organizations around the world have been using Tableau as a way to tell stories about topics such as how much people get paid, IED explosions in Iraq, or invasive wasps in Australia. As mentioned, Tableau is a bit pricey for a small company (starting at $500/year plus extra charges per user), so it's important to check out its pricing plans before you start considering it. 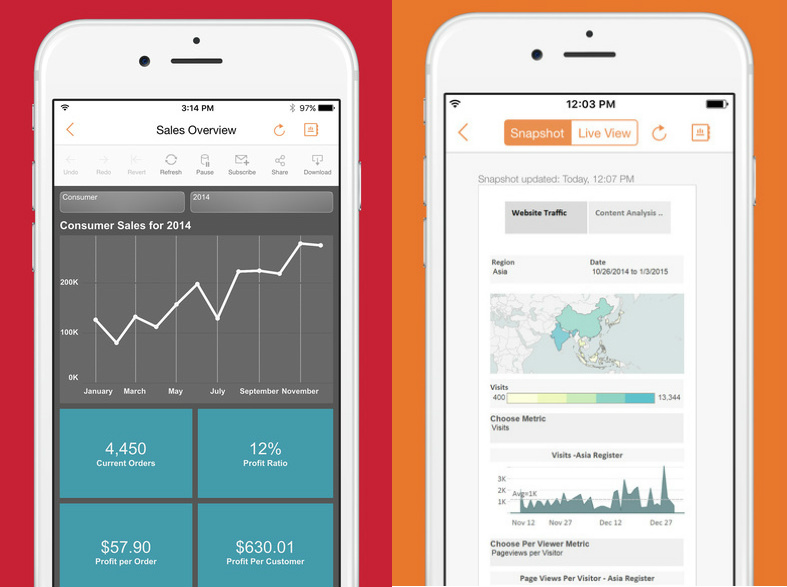 Tableau for iOS (called Tableau Mobile), like Zoho Analytics, is geared toward viewing data rather than fundamentally modifying it. You can view your visualizations (referred to as "vizzes"), change the way data is displayed, and save some snapshots of your vizzes for offline use.

Klipfolio has got a diverse customer base: small businesses, large enterprises, and nonprofits use it. Its features include extensive security and compliance, support for multiple data sources to be consolidated into one report, branding options, and a self-service editing KPI. Pricing for Klipfolio starts at $24 a month, and that basic payment level gets you up to five users. 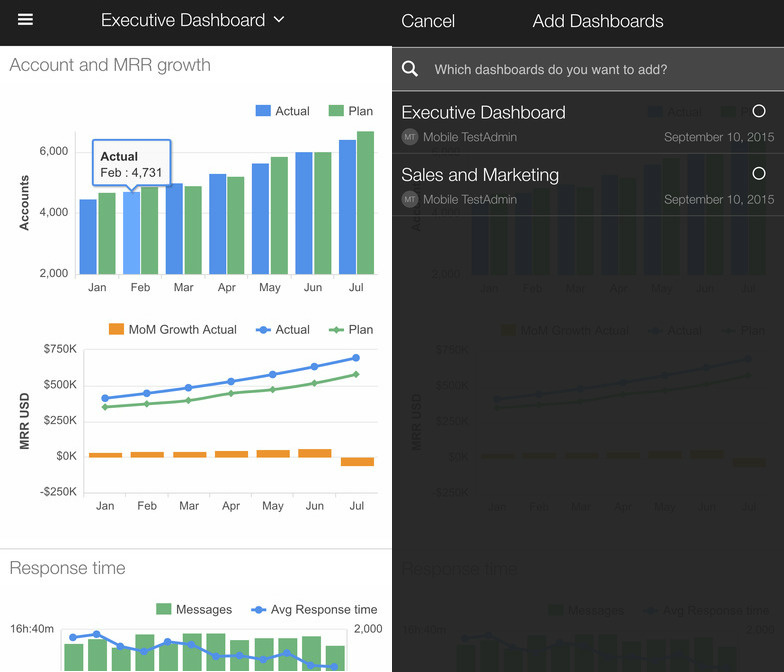 Klipfolio for iOS is mostly focused on giving you different ways to view visualizations; noticing a pattern here? There are hundreds of pre-built visualizations, dashboard customization options, and data mashups. It also has an open web accessible resource connector to utilize your data. It's important to note that Klipfolio has been optimized to work with iPhone 5, so on the off chance you're still using a model prior to that, keep it in mind.

Sometimes it's good to use a tool that's been made by one of the big players. In this case, there isn't a bigger player in the software business world than Microsoft. Microsoft's cloud clout brings "59 out-of-the-box connections" for apps such as Salesforce, Facebook, Zendesk, and Google Analytics into Microsoft Power BI.

It also has smoother integration with other Microsoft products, such as Azure and Microsoft's query engine. Microsoft Power BI has features such as real-time data metric dashboards, detailed visualizations, and query data that uses natural language questioning. Microsoft also offers something called Power BI Service that allows you to share data and reports among colleagues and users (e.g., your customers) that use the service. 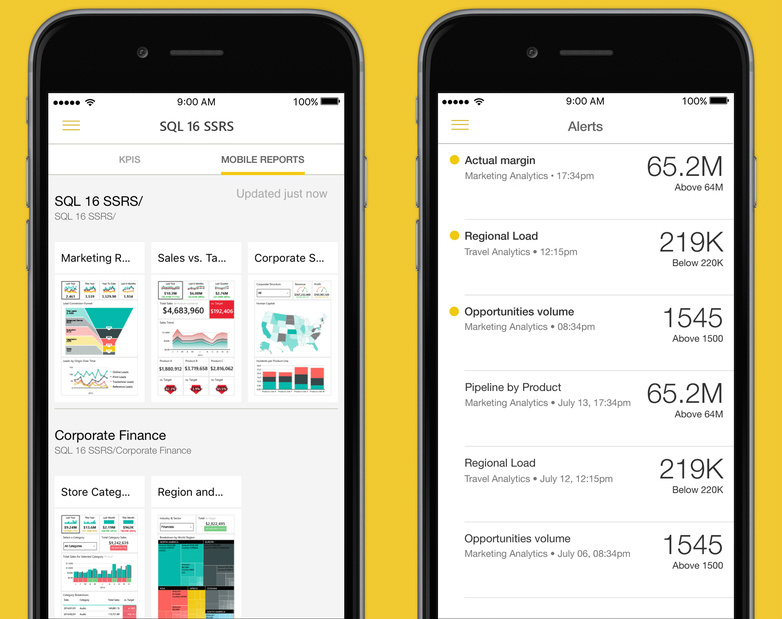 The iOS version of Microsoft Power BI has some nifty features. These include the standard visualizations (plus charts, maps, and graphs) plus user-friendly filters that let you view the data in a relatable way without much previous experience. One interesting point that Power BI markets is that you can set push alerts to be sent to your phone in case there are big changes in your data. The alerts could work as a canary in the coalmine in case something goes wrong (or conversely, if everything starts going right).

A question to you, dear readers

What do you think of this list, and more importantly, the state of mobile BI companion apps? You may have noticed that the options in terms of data manipulation and input aren't there, and rather they mostly present different ways to view the data. Do you think that's a good thing? Should BI apps give more control to mobile users in terms of data manipulation? Let us know and check out a side-by-side comparison to get more details on all the apps listed above.