The Low-Down on Microsoft Planner

Planner separates itself from similar task management applications in its dashboard, offering visually digestible information at a glance.

They say there’s no “I” in teamwork, but there can be a lot of “aaaargh”. If you find it tough to get your team organized, Microsoft Planner can make things hurt less.

Although it’s quietly been rolling out for since the end of 2015, Microsoft’s simplified task management software, Planner, is out now. In this article we’ll take a look at the basics behind it, who Microsoft is targeting with the app, and how to get it. We’ll keep this article updated periodically as Planner gets more updates and (possibly) becomes a staple in the Office 365 suite.

Who is Microsoft Planner for?

Microsoft is no stranger to project management software; it has a solution called Microsoft Project. Although Planner and Project may sound similar at a glance, they are for totally different audiences.

While Project is aimed at traditional project managers that work with methodologies such as Agile or Waterfall, Planner is aimed at the growing number of people who don’t care about Gantt charts and prefer drag-and-drop visual methods to stay on top of work. After all, project management at its heart is a series of to-do lists.

How to get Microsoft Planner

Planner is bundled with Microsoft Office which means that it will integrate with other Office Products such as Word, Excel, and PowerPoint. At the moment, it’s only available for Office 365 Business members who requested access to it early on and later other business subscribers, but it’s not hard to imagine restrictions being loosened up into order to target Trello users and win them over. That’s just speculation on my part, but the pragmatic design of Planner seems geared towards a new generation of B2C tech-inspired workers rather than traditional Office power users.

But speculation aside, as it currently stands you’re looking at an Office 365 Business subscription which grouped into three different tiers. It’s a good idea to check out Microsoft Office 365’s pricing page to get a better idea of what best suits your need. 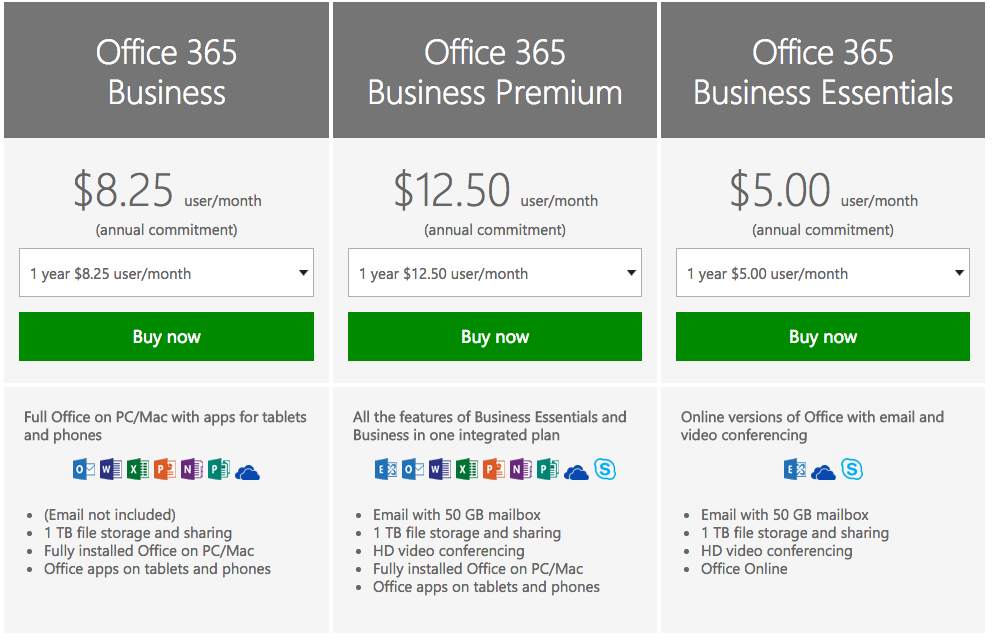 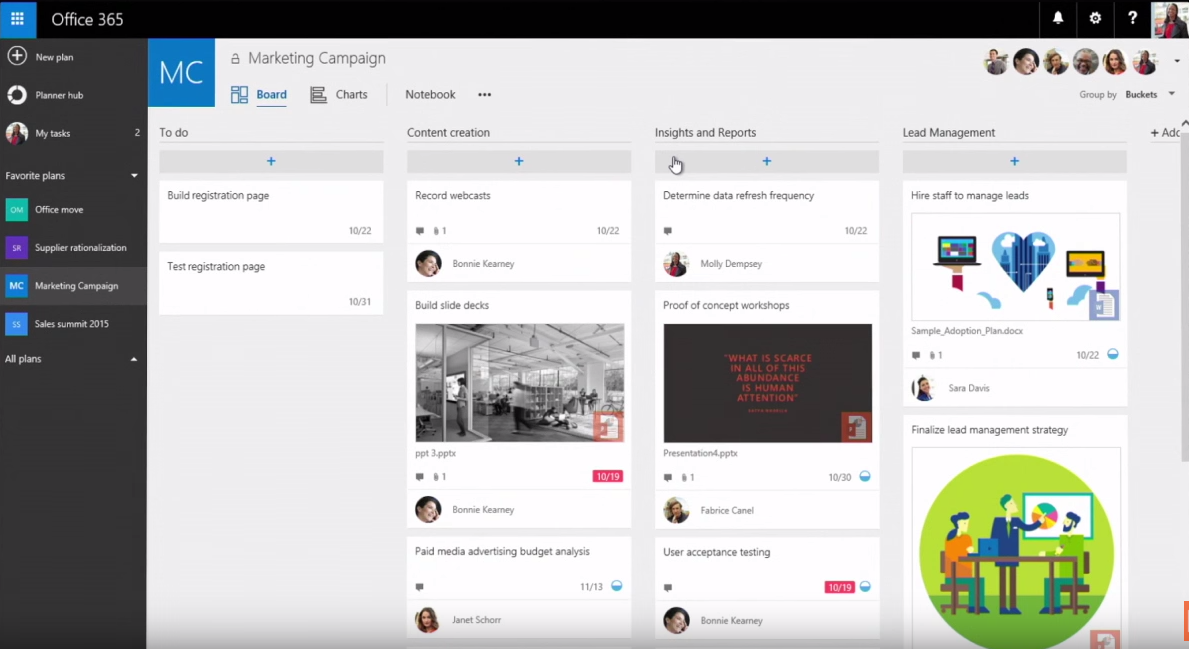 Trello is famous for its intuitive drag-and-drop control and Microsoft expands upon this. Rather than using a tagging system (e.g., @John), Planner allows you to drag a team member’s icon into a task or board.

The boards are modeled in the Kanban style, so it resembles a bulletin board filled with cards that are listed vertically. It is important to note that, at the moment, only one person can be assigned to a task (Trello allows for multiple). That aside, the point is that intuitive design is the key.

Planner separates itself from similar task management applications in its dashboard, which is displayed in donut charts, offering visually digestible (the opposite of Microsoft Project’s Gantt charts) information at a glance.

Each donut chart displays completion via color. For example, the color yellow is for tasks not yet started, red is for late tasks, blue is for tasks in progress, and green is for completed tasks. You can also keep an eye on the progress of individual tasks of team members which are displayed via bar charts that use the same color coding system as listed above. 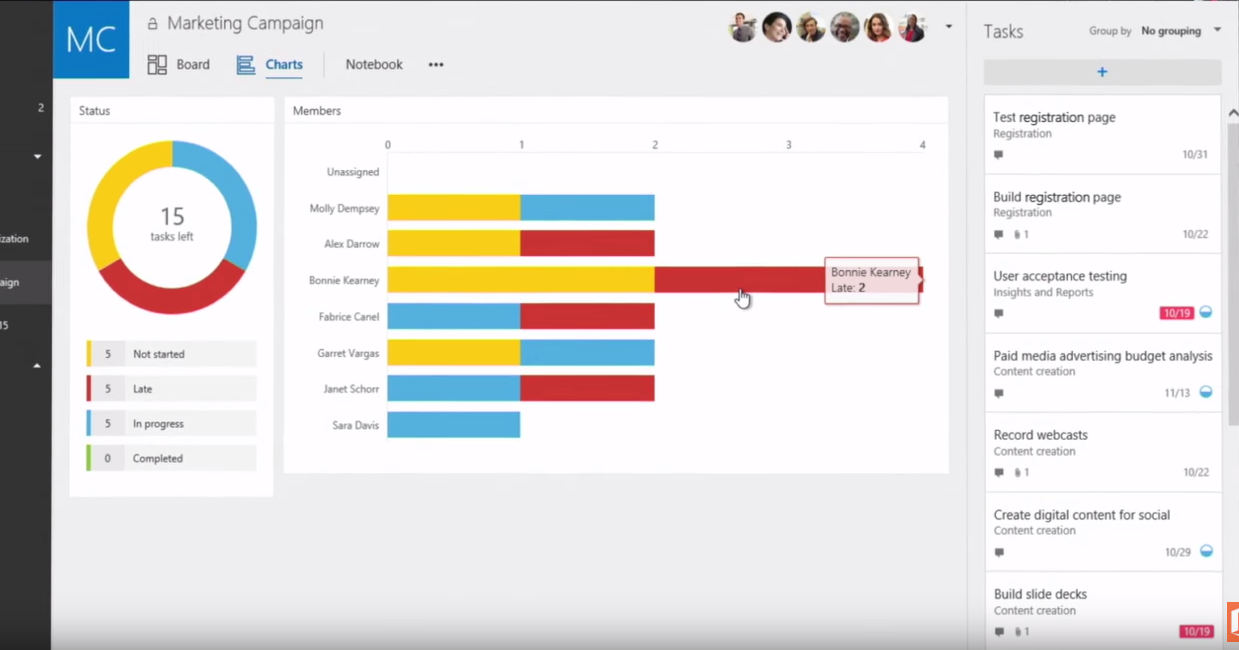 In terms of searching tasks, Planner allows for search through Office Groups and from there you look for files from the OneNote notebook. It’s important to note that there isn’t a feature for searching specifically through tasks (something that Trello offers) so searching will come easier to those who are familiar with navigating Office products.

What people are saying

There hasn’t been much so far in terms of reactions—likely due to the gradual rollout of the product—but here are some first impressions of Planner.

Microsoft, always slow to catch up with tech trends! https://t.co/6bHRMrH0Zs

MS planner looks great! If it makes it into the enterprise might just replace the dodgy trello & basecamp instances https://t.co/fHrR30cB1Q

At the moment, there is no standalone Microsoft Planner mobile app. However, Planner on the web uses responsive design so the website will be optimized for your mobile phone, offering most of the same functionality that you would find on the cloud app.

What are the alternatives to Microsoft Planner?

Obviously two bullet points aren’t going to do justice to Trello and Asana, so here’s a helpful comparison of Microsoft Planner versus Asana versus Trello. In it, you’ll find more detailed information such as features, pricing, and integrations.

Where to find more about Microsoft Planner

Where to go from here