The Benefits of AB Testing: 5 Tools for eCommerce Merchants

Are your eCommerce conversions down but you're not sure why? Maybe it's time to start enjoying the benefits of AB testing. Check out these 5 apps to get you started. 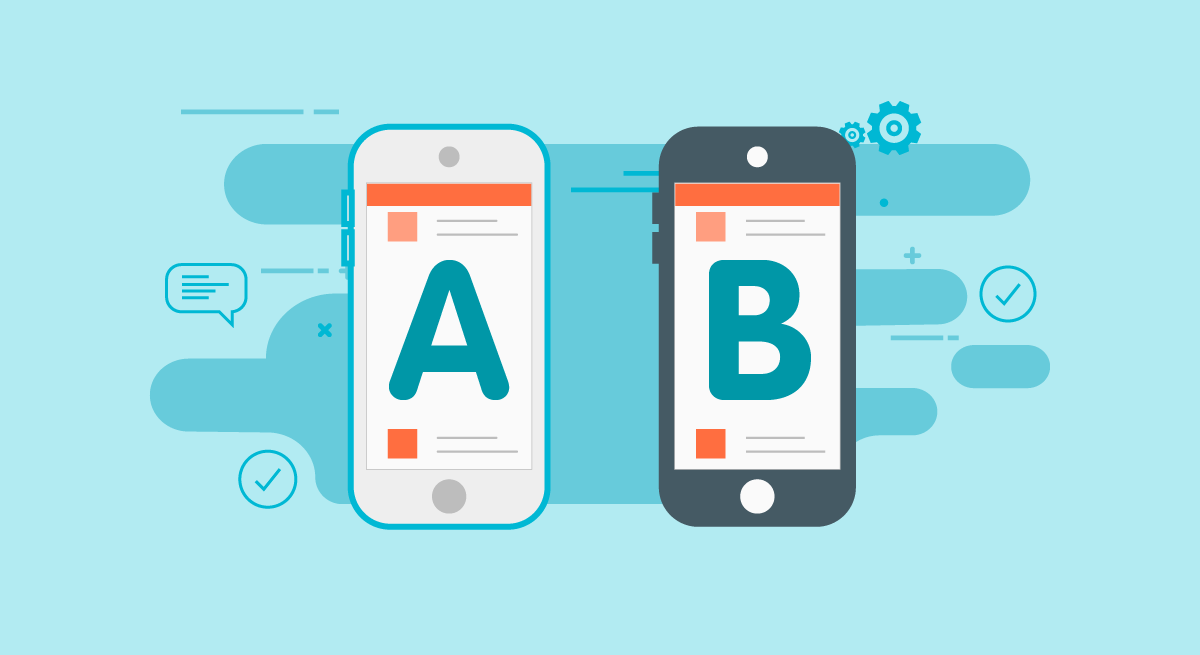 A: This article will show you how—for as little as seventeen dollars per month—you can drive thousands more customers on your eCommerce website to convert using AB testing.

B: Don't know the benefits of AB testing yet? Read this article to discover five awesome AB testing apps that will help you ramp up conversions in your eCommerce store.

Now, which of the sentences above appealed to you more? Which description of this article would make you more likely to click the link and read on (or rather, convert)?

One of the benefits of AB testing is that it allows you to test multiple ideas out at once-maybe your product recommendations aren't bringing in as many customers as they once did, and you'd like to see what the result would be if you removed it completely. AB testing allows you to try variations of several areas of your site for a set amount of time, meaning that you don't need to overhaul your eCommerce store as a whole-the results will show you exactly what is, what isn't, and what could drive conversions.

Want to know more about how AB testing can help your eCommerce store drive conversions? Stay with me as I go through five AB testing apps* below, including functionality and pricing information.

* The apps selected in this piece have been selected based on the level of their AB testing functionality that is suitable for eCommerce stores. The tools listed also represent several pricing levels.

Optimizely is a dedicated optimization and experimentation platform that specializes in A/B and multivariate testing for websites. Optimizely is a great option for those who want to grow their eCommerce conversions, but lack skills in the coding department. To this end, users can create duplicate test pages as well as track customer clicks, time on page, and conversions.

Sites that want to delve deeper can target their campaigns to track visitors from certain geographical locations, visitors who are using certain devices, or visitors who came to the site from an AdWords campaign. The customer profiling feature also allows you to collect customer data such as demographic and behavioral to inform your campaign efforts. 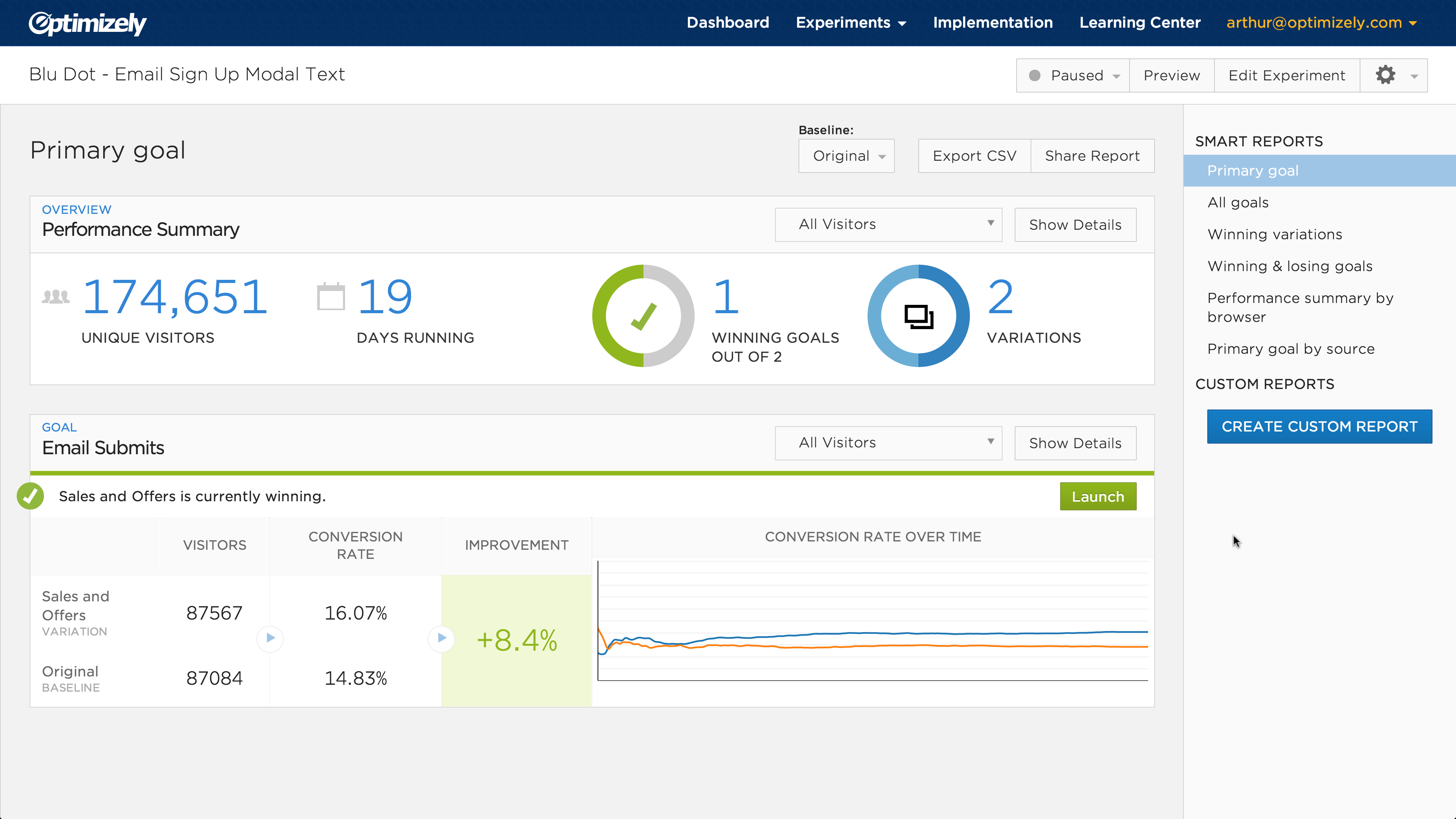 Pricing: Optimizely offer a free trial and a free 'starter' plan (the free starter plan will no longer be available after 28 February, 2018). Plans with customizable functionality start from $17 per month.

Visual Website Optimizer (VWO) is an AB testing and conversion optimization platform that boasts an easy to use interface and a heap of smart eCommerce integrations such as Shopify, Magento, BigCommerce and many more.

VWO is a great option for those who want to combine AB testing with other tests such as multivariate testing, split URL testing, and usability tests. Advanced testing options also include free trial lengths, delivery options, and promotions. VWO's "idea-generation" tool also provides testing suggestions for users who are a little unsure as to how to get the ball rolling. 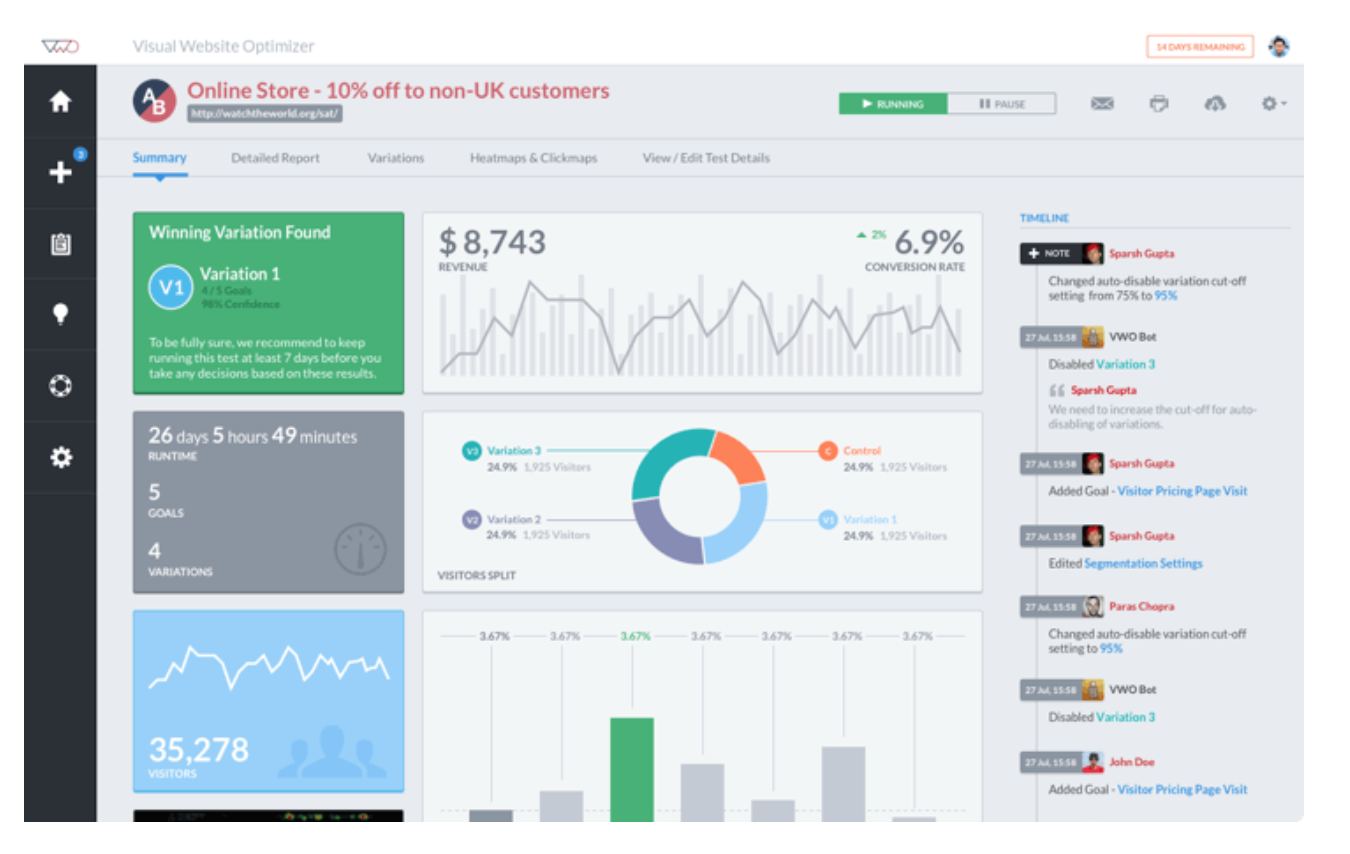 Pricing: Prices start from $49 per month for testing up to 10,000 visitors and a free trial is available. All plans include the following features:

Convertize is a conversion optimization and AB testing tool that uses psychology-based persuasion tactics to drive conversions. Providing a checklist before tests go live, Convertize helps organize testing information for users by listing how many scenarios are being tested and how long they're expected to last.

Convertize is a good option for those who want to AB test across multiple devices such as desktop, mobile, and tablet, and for those who want to go granular with their testing, with the ability to test languages, countries, times of day, and returning visitors. By analyzing conversion, event, and cross-domain tracking, Convertize is able to define what your website is missing to drive conversions. 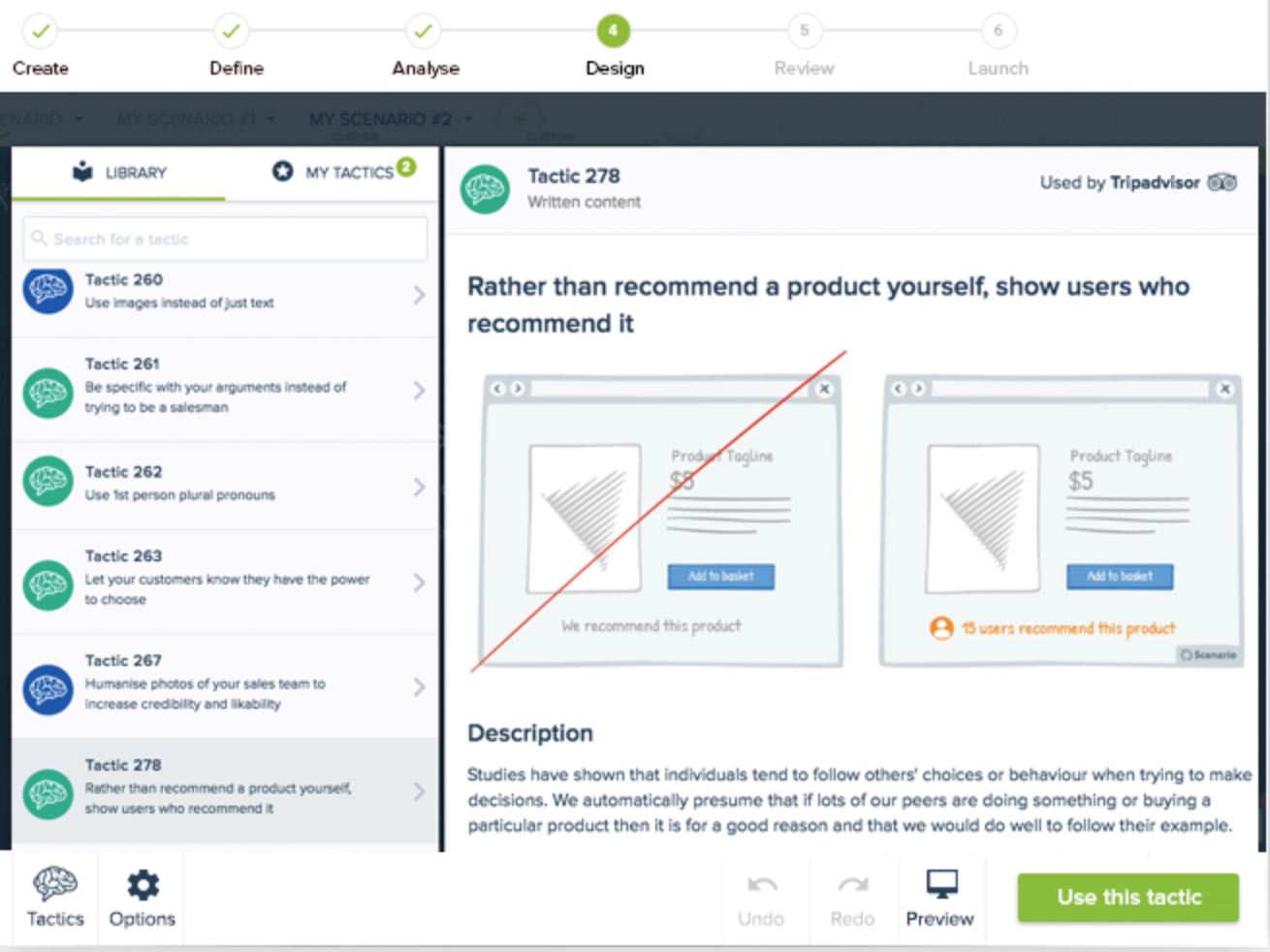 Pricing: A free plan is available for websites with up to 30,000 visitors per month. Other pricing plans include:

Omniconvert is a website optimization tool which houses AB testing, surveys, and personalization experiments together under one system. Omniconvert's stack testing feature allows users to use a previous AB test as the "control" for future tests, which accelerates the optimization process.

Omniconvert has a particularly easy to use WYSIWYG editor for AB testing, test scheduling, and the ability to segment your traffic based on over forty criteria. Split testing also allows you to split your website's traffic between a control page and the variations you're testing.

Freshmarketer is a conversion rate optimization tool that assists with funnel analysis, which helps to determine which pages are experiencing a high bounce rate and therefore which pages to target with AB testing.

Freshmarketer also uses heatmaps to pinpoint areas within pages that users are (and aren't!) engaging with, and their AB testing feature allows users to create multiple versions of pages within a visual editor, in order to identify which option provides more conversions. AB testing can also be performed through Freshmarketer's Google chrome app. 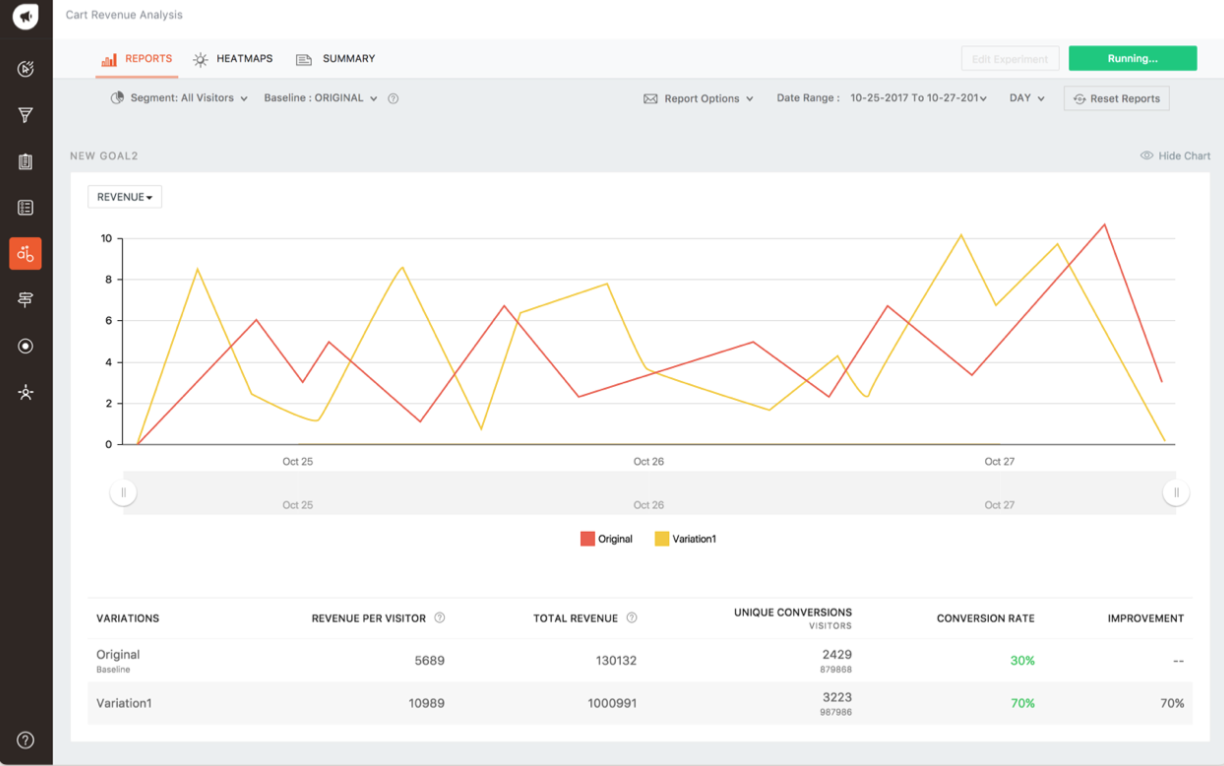 Pricing: Freshmarketer offers an automatic thirty day free trial with access to its full feature set. Prices start at $44 per month for up to 20,000 visitors.

Ready to start reaping the benefits of AB testing software?