7 iOS Collaboration Apps for Small Teams on a Budget

Working on a small team and looking for affordable and easy-to-use iOS collaboration apps? We got you covered.

Spoiler alert: This article is for people working in small teams (preferably in small companies) that need to find a collaboration or communication tool and can’t afford to spend much time or money on researching solutions. This article is not for people who want to do in-depth research on an expensive, enterprise-focused solution.

We’ve put together a list of some of the best iOS collaboration apps for small teams or businesses, “small” being defined as having 10 or less members. This is the “sweet spot” of team size for collaboration software, with 62% of teams using this type of software falling into the 1 to 10 person bracket, according to a Bitrix24 report.

For the sake of consistency, we’ve selected these apps based on a few criteria:

iOS collaboration apps with a focus on chatting

If you need something that's focused on just chatting, we’ve researched and compiled a list of the best options.

Slack is the Hansel of the collaboration world; the company is receiving a ton of press and rave reviews from users. What makes Slack so popular? Whether or not you remember back to the days of AOL chatrooms, are currently using WhatsApp, or have (somehow) avoided messaging programs up until this point, even you’ll do fine with Slack thanks to its intuitive design. Its iOS collaboration app has been equally well received with features such as deep search, calling, file sharing capabilities, integrations with popular apps such as Zendesk and Dropbox, and, of course, instant messaging. It’s also worth noting that it has an incredibly detailed iOS log of updates that’s worth checking out to get the most of its new features. 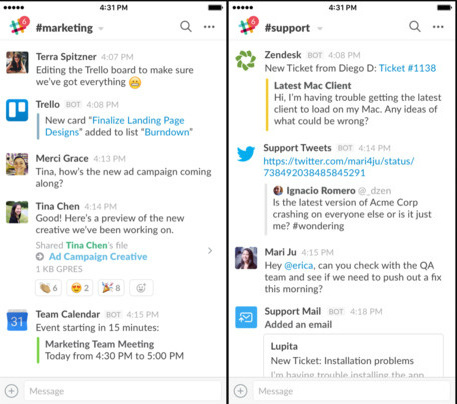 Price: You can sign your team up for Slack at no cost and get features such as searchable message archives (up to 10,000 of your most recent messages), 5GB of storage, access to its iOS app (as well as other platforms), and two-person calling. If you want to upgrade to include more features, there are more tiered plans (Standard, Plus, Enterprise) that charge per user.

The Zoolander to Slack’s Hansel. HipChat hails from the Atlassian family of software solutions, which includes JIRA and Confluence. HipChat hasn’t fared as well in terms of comments on its iOS collaboation app, but Atlassian is continually improving the app (keep an eye on update notes). Features include a variety of chatbots, support for 35 different file types, and a searchable chat history. It also integrates with apps such as Mailchimp and Trello. GetApp user Sky Lukas writes, “It can be be integrated into monitoring and alerting tools to quickly contact group within chat rooms and enable rapid response using chatbots. There are so many pre-built integration’s (sic) that you hardly have to do anything at all, but if you want or need to they have a very good API that you can use to write your own integration.” 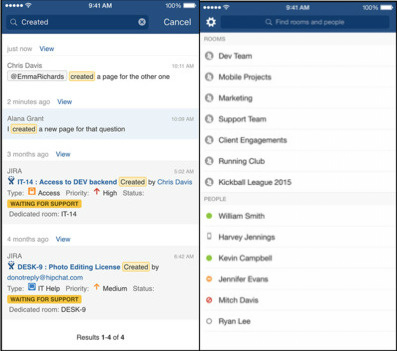 Price: HipChat has two available plans: Basic and Plus. Basic is free and will get you features such as individual and group messaging, 5GB of storage, a searchable archive of your 25,000 most recent messages, and unlimited integrations. For total access to all the available features, HipChat costs $2 per user and it’s billed monthly. Note: Two bucks a month is a decent price for a team under 10, but if your team grows, the cost will quickly add up (a team of 20 would cost about $480 annually).

Google Hangouts is free, and it’s brought to you by Google, which also provides you with the email service you likely use, the maps service you swear by, and the OS that’s on 66 percent of the world’s smartphones. Google Hangouts is an amalgamation of three different Google messaging services: Google Talk, Google+ Messenger, and video-calling app Hangouts. The iOS app includes features such as video calling (supporting up to 10 people for free), VoIP calling, messaging features, and a searchable message history. Another perk of Hangouts for iOS is that you can integrate your phone’s voicemail, SMS, and phone number. Overall, it’s a solid option for smaller teams because your team members are likely familiar with navigating Google’s products, and the pricing is reasonable. 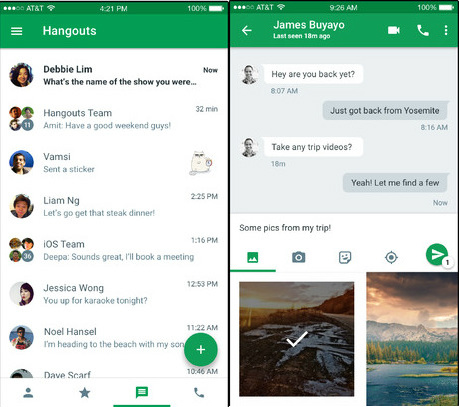 Price: If your team wants to use the app for free, that’s entirely possible. Google, however, offers Apps for Work, which are modified versions of its app suite (think Docs, Sheets, and Slides). Plans usually cost around $4 a month per member, but it’s worth checking out the pricing chart if you want a subscription. Remember though: you can still give it a try without paying for anything.

Despite its un-business sounding name, Yammer is actually part of the Microsoft Office family. Based on its design, Yammer has taken some cues from Facebook - a familiar blue-and-white motif with a bottom screen that gives access to five quick links, including feed, inbox, groups, and notifications. Although it may not be original, the deja-vu design makes the app less intimidating or byzantine so that it’s easier to get your team on board. Yammer’s iOS collaboration app supports features such as quick-shot photo and video sharing, 25 different languages (an area Microsoft has been developing), and interactive notifications. 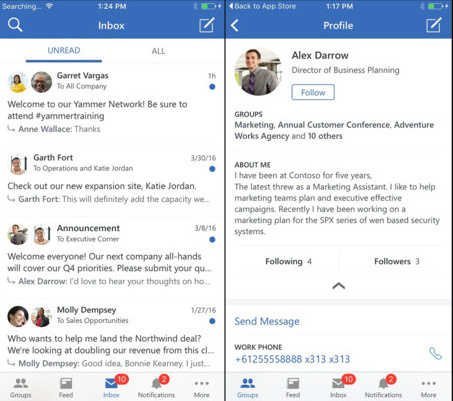 Price: Yammer is available for free, but if you’re looking for more features such as integration support and the ability to fine tune features such as security, you’ll want to take a look at upgrading. If you have an Office 365 account, you might already have access to Yammer. Rather than boring you with the details of each slightly different pricing plan here, check out Yammer’s page for more info.

iOS collaboration apps with a focus on project management

If you need something that goes a bit deeper than messaging, we’ve also compiled a list of a few collaboration options that offer boards and other task management features to help your team stay lean and organized.

Asana is great for small teams that need to keep track of a project’s progress. The iOS version inherits much of the same design as its cloud-based parent, but it’s been cleverly optimized for mobile devices. The dashboard is across the bottom of the screen (rather than to the left a la Beyonce), and it organizes large amounts of information so that it’s easy to navigate without being cumbersome. It's also a regular in the top 10 as one of GetApp’s category leaders for task management, project management, and project collaboration. 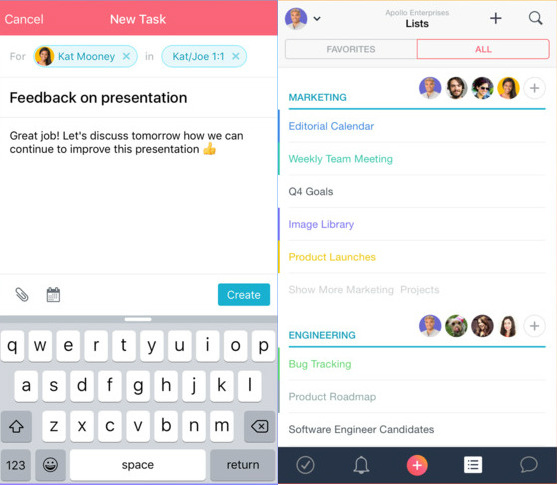 Price: Asana is free for up to 15 members, which makes it a great fit for this article (small teams 10 and under), although you won’t get access to all its features for free. Instead, you’ll get access to unlimited tasks, projects, and conversations, as well as basic dashboards. The Premium plan runs at $8.33 per month, although Asana says that the price per member is automatically reduced for small teams. The premium version includes features such as priority support, private projects, no team member limit, unlimited guests, and some more customization options regarding security and data exporting.

Basecamp is great for small teams because it’s a versatile solution wrapped in a simple, yet elegant design. Basecamp has features such as to-do lists, message boards, group chatrooms (called “campfires”), calendar features, individual messaging, and reporting. Currently, Basecamp is in its third iteration (Basecamp 3), although Basecamp makes the unusual move of supporting legacy software and not forcing customers to upgrade or update. The current iOS version of Basecamp 3 (there’s a separate app for Basecamp 2 and Basecamp classic) has a 5 star rating based on 54 reviews. 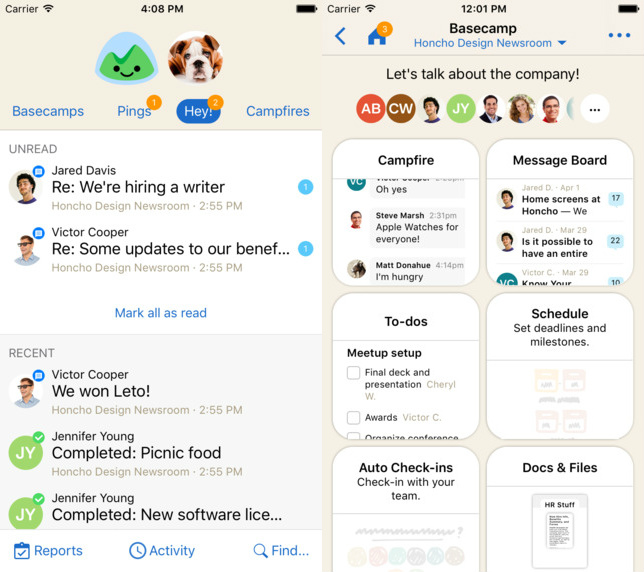 Price: Basecamp uses a flat pricing structure: $29 per month gets you 100GB of storage, access for people within your company, and the features listed above. As opposed to other solutions mentioned in this article, Basecamp’s price does not change based on the number of users it has. Basecamp’s next tier up, Basecamp With Clients, costs $79 per month and has the same features as the cheaper Basecamp plan, but allows for external members to join and gives you access to its Clientside messaging feature.

Although Trello doesn’t have a powerful or complex messaging system, its user-friendly design and great price have made it tremendously popular. The best way to think of Trello is as a shared to-do list, which is just what some small, no-frills teams need. The iOS version of the app has an excellent rating (4.5 stars based on 2,395 ratings for all versions) and most of the same features you’d find on the web version. Trello has also got a great relationship with its user base, which is apparent from its comical developer’s notes. A user on Trello’s iOS page writes, “Oh- and please don’t stop the goofy update releases. Trendy or not/they’re great. SERIOUSLY!” 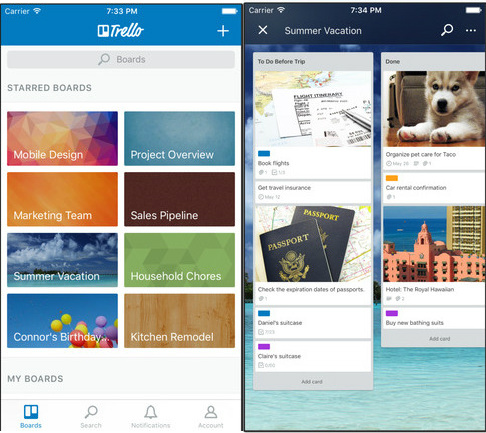 Price: Trello comes in three flavors: Free, Business Class, and the ignored-in-this-article Enterprise. The free version gets you file attachments up to 10MB; integrations with Box, Drive, and Dropbox; and unlimited boards, lists members, checklists, cards, and attachments. After that, it gets a bit more expensive, starting with the business class plan that’s priced at $9.99 per member per month, billed annually. The business class option includes everything in the free tier plus more integrations (Hangouts, Evernote, Mailchimp), file attachments up to 250MB, priority email support, and more control of security.

io-YES that made my job easier

Hope our list got your needs covered. Check our collaboration and communication software categories if you think we missed any big players or up-and-comers.